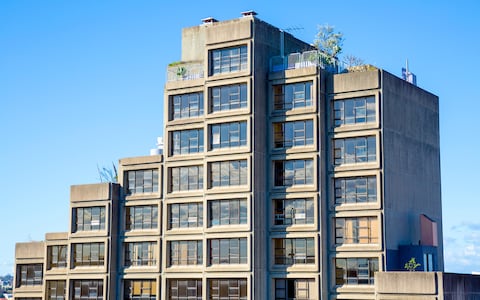 with founding family’s investments in mining …

to redevelop the interior of the Sirius for luxury apartments … for High Net Worth? having forced out Public Housing tenants

Unfortunately Mr Avidan was outbid as he had proposed a string of galleries, bars, a glass lift for public access, and an art gallery at his own cost!

The controversial Sirius building near Sydney’s Circular Quay has sold to a virtually unknown company, JDH Capital, for $150 million after an extended sales process.

The strategic site is best known for its brutalist-style tower, but it was marketed as one of the best development opportunities in the prized harbourside precinct, and the former housing commission site will now be converted to luxury apartments.

The NSW Coalition government delayed the announcement of the winning bidder until well after the March 23 election.

Little is known about the winning bidder run by Sydney-based Jean-Dominique Huynh.

The former Macquarie banker has an office in Paddington and dabbles in developments around the city. He is well-known in investment banking circles.

Despite its scant local track record in property and the founding family’s investments in mining, JDH Capital says it has called in a team including BVN Architecture, Architectus, Urbis and Richard Crookes Construction to remake the Sirius in a way that is “more sensitive” to The Rocks district, while also “retaining the building’s iconic features”.

JDH was one of two short-­listed developers — the other was Chinese-backed Aoyuan International — after a consortium led by Sydney developer Danny Avidan was knocked out, even though he had the backing of art director Edmund Capon.

The developer of the troubled Opal Tower at Sydney’s Homebush, Ecove, was forced to pull out in January. Ecove had been bidding with Aoyuan International but pulled out following lobbying efforts from powerful NSW councillors and MPs.

The Australian revealed in April that Avidan, who had assembled a team of architects including the well-regarded Cox Architects, had been dropped from the bid.

The Sirius building was developed in the late 1970s and is a prominent example of the brutalist architecture style. It was home to housing commission tenants before they were forced to vacate the tower last year.

The NSW government said the building had been sold to the private Sirius Developments, following a competitive tender process that drew “significant” national and international interest.

Sirius Developments is owned by JDH Capital, which is controlled by the Huynh family.

The release said the company, with its equity and development partners, had undertaken “similar projects” throughout Australia and internationally.

“This refurbishment of the building will result in renewal and activation of a critical area in The Rocks, adjacent to Sydney Harbour Bridge, while remaining sensitive to the heritage of the precinct,” NSW Minister for Water, Property and Housing, Melinda Pavey said.

JDH has proposed refurbishing the existing building so it contains 89 luxury apartments as well as retail and commercial space on Cumberland Street and on Gloucester Walk.

Former rag-trader Mr Avidan had proposed a string of galleries and bars along Cumberland Street and a glass lift for public access down to George Street at his own cost, sources have said.

As part of his deal, he also had proposed an art gallery that would have been donated to the nearby Museum of Contemporary Art at his own cost, according to sources.

The gallery was proposed by the late Art Gallery of NSW director Capon.

This article originally appeared on www.theaustralian.com.au/property.