Economists predicted it will grow to $8 billion by 2019-20. But that was before the Coalition opened up a can of worms with Tim Wilson’s franking credits roadshow.

Gen X and Y Taxpayers with a 40 year old on the cusp contributes $7,300 a year with the number of these taxpayers 4.4 to the number of Boomers aged 65 or older …

Franking Credits are not sustainable!

How #FrankingCredits delivered victory to Boomers over own kids 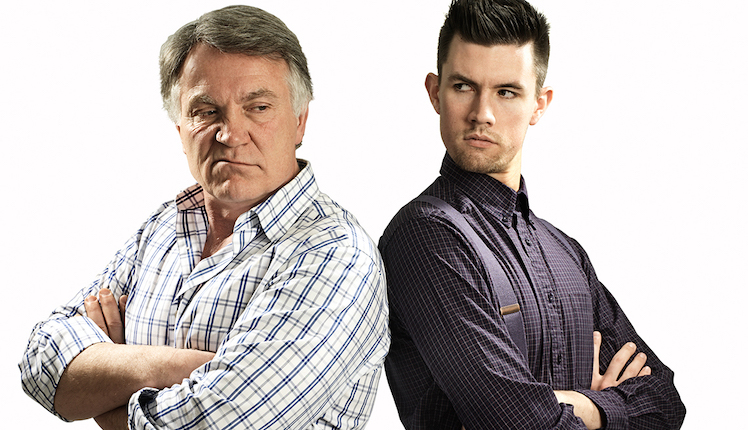 IT WAS the morning after the night before and things were still surreal. Labor had lost the unlosable election and an elated Scott Morrison was proclaiming his victory a “miracle”.

With the barrage of analysis, counter-analysis, commentary and finger-pointing yet to be unleashed, it felt like a good opportunity to enjoy the calm before the post-election storm. So I decided that a decent hit out on the bike was the go.

As I do almost every Sunday morning, I checked the weather forecast, donned the appropriate cycling gear and grabbed the bike out of the garage. Looking for a route that was a bit more challenging, I pointed my trusty bike in the direction of Eltham, in Melbourne’s outer east. Off I pedalled.

Leaving early, my route took me through a still sleepy Brunswick, the inner-city suburb just north of the city, east through Heidelberg and finally to Eltham, nestled at the foothills of the Shire of Nillumbik.

Elated in Eltham, bummed in Brunswick

Eltham sits in the electorate of Menzies, and the incumbent Liberal candidate, Kevin Andrews, comfortably retained his seat with a Two Candidate Preferred (TCP) vote of 57 per cent. Having a well-earned brekky at the Eltham shopping strip it was hard not to notice two distinct themes.

Firstly, I was surrounded by people in their mid-fifties and beyond, a demographic oft-labelled “Baby Boomers”.

Secondly, these Boomers were (from their demeanour and the bits of conversation I caught), thrilled that the Coalition government had been returned for another term in office. It was fair to say that the mood in Eltham that Sunday morning was positively “chipper”.

The ride home took me through the heart of Gen Y-centric Brunswick, in the electorate of Wills, where Labor’s Peter Khalil held off a stern challenge from The Greens. There the cafés lining ultra-hip Lygon Street told a very different story.

The mood in Brunswick was distinctly more sombre, with none of the energy pulsating around Eltham. Poker-faced twenty and thirty-something Millennials sat huddled in cafes in quiet contemplation.

In the few short hours I spent riding that day, I saw the two sides of the election outcome; the winners and the also-rans. And as a Gen X, wedged between the Boomers and their Gen Y kids, I find myself asking one question: what exactly happened on Saturday 18 May 2019, and what does it mean for the various generations?

It was all about those Franking Credits

Labor’s proposal to end the ability of wealthy, self-funded retirees to claim excess franking credits attached to dividends received from Australian shares turned out to be one of the most contentious issues of the election campaign. If you aren’t sure what a dividend or a franking credit is, this short primer from Michael West is an excellent explainer.

Franking credits, introduced by the Hawke-Keating government in 1987, were originally designed to ensure that individuals were not subject to double-taxation — to avoid a situation where companies first pay income tax only to have their shareholders pay tax again on that same income. The franking credit was the mechanism to ensure that individuals effectively only paid “top up tax”, being the difference between the company tax rate and their (presumably) higher individual tax rate.

*This equitable relationship broke down in 2001 when the Howard government changed the law.

Where franking credits were higher than someone’s tax bill, they could claim a refund for any surplus — even those without any taxable income such as Age Pension recipients.

The cost to the budget back then was around $500 million. The real game changer however came in July 2007, when self-funded retirees over the age of 60 were allowed to have their private pensions (from their Self-Managed Superannuation Fund or public-offer Fund) no longer subject to tax.

These individuals can still however claim franking credits on the Australian shares they hold, even though they don’t pay any income tax on the dividends. Australia is the only country in the world that provides this level of largess to its middle and upper income retirees.

*Little did our lawmakers expect back in 2001 that the cost to the budget would blow out to nearly $6 billion by 2014-15. Economists predicted it will grow to $8 billion by 2019-20. But that was before the Coalition opened up a can of worms with Tim Wilson’s franking credits roadshow.

It advertised the unique advantages of “FreeMoney” up and down the countryside, firing up the older generation.  For more on how retirees are now piling onto the franking credits bandwagon post-election, see Sandi Keane’s story below as well as the series of explainers in Michael West’s Kitchen Table Archives.

How good are Franking Credits!

How big is this tax-payer funded benefit? For some Self-Managed Super Funds (SMSFs) it can amount to between 25-30 per cent of the total income generated on an annual basis. And, in a nutshell, that was what the election furore surrounding the so-called “retirement tax” was about.

*Who benefits from maintaining the excess franking credit rebate? This question was put to the Parliamentary Budget Office during 2018 and their analysis was, pardon the pun, frankly unsurprising.

*According to their analysis (see table below) over 80 per cent of the benefit goes to SMSFs larger than $1 million, with over 50 per cent going to SMSFs over $2.4 million. SMSFs currently cost the budget some $2.6 billion in excess franking credits, but what does the “typical” SMSF receive in franking credits each year? That question was also put to the PBO earlier in 2018, and the results of their analysis make for some pretty sombre statistics.

*To put this level of taxpayer funded income in its rightful context, it surpasses the $36,301.20 a couple receives on the current maximum amount of Age Pension.

*In essence then, we now have a two-tiered social welfare system for older Australians;

**So excess franking credits for self-funded retirees are a form of transfer payment from working Australians to retirees. That much is clear. But exactly how much does it cost Australian taxpayers each year?

The PBO analysis, based on 2014-15 tax data, suggested a figure of around $5 billion. Current estimates put the amount closer to $6 billion.

*What exactly does $6 billion pay for in the Budget? Well, based on the projections for the recently released 2019-20 Budget, that amount of taxation savings would cover…

That last one is perhaps the most galling, as it includes the Newstart benefit which has not increased in real terms in some 25 years.

The message this sends is unequivocal. If you have a go at gaming the dividend imputation system, you’ll get a go at taxpayer-funded largess. But if you’re unemployed and actively looking for work, you’ll get to survive on $40 a day.

Not sure I’m keen to subscribe to this version of the “fair go” for all Australians.

Is the party over?

So wealthy retirees get to keep their excess franking credits, but will their children enjoy the same largess? It is unlikely, as the current trajectory is fiscally unsustainable.

Danielle Wood, Program Director, Budget Policy and Institutional Reform at the Grattan Institute recently pointed out that incomes for households over 65 have more than doubled over the past 25 years, while at the same time paying virtually no more tax than people the same age did back then.

Rather, the share of older households paying any tax at all has fallen from 27 per cent in the mid-1990s to 17 per cent today.

Why does this matter? Because in a land of “lifters and leaners”, it’s tax-paying Gen X and Gen Y who are now doing the truly heavy lifting.

As Wood points out, Baby Boomers who hit their peak tax contributing years (in their forties) were likely contributing some $3,200 a year to support the older pre-WWII “Silent” generation via the tax-transfer system.

An average 40 year old today (on the cusp between Gen X and Y) is contributing an inflation-adjusted $7,300 a year.

This as the dependency ratio (the number of working-aged taxpayers to the number of Australians aged 65 or older) continues to fall, from 7.4 in the mid-1970s to 4.4 in the most recent Treasury Intergenerational Report, and forecast to plummet to just 3.2 by the year 2055.

It is pretty clear this tax burden can’t be sustained indefinitely.

At some point, the party will have to come to an end, and when it does, those supplying the franking credit Kool-Aid to wealthy retiree Boomers (namely Gen X and Gen Y taxpayers) will find themselves facing a retirement tax regime nowhere near as accommodating.

Let’s just hope it ends amicably, equitably and before the actuarial life expectancy of the youngest Boomer which, according to my reading of the Australian Government Actuary’s latest life expectancy tables, would be in around 30 years.

For if it doesn’t, we’ll have consigned an entire generation of Australians to a standard of living appreciably lower than that experienced by their parents. Hardly what you’d expect in the Lucky Country.

A slightly shorter version of this article originally appeared on the Clover.com.au blogsite here.

This article has been prepared by Harry Chemay, an officer of Clover.com.au Pty Ltd (AFSL No. 479416) (“Clover”). Clover is a registered financial services provider, however nothing in the above article should be construed as personal or general financial advice. The content of this article is meant to be of an informational nature only, and primarily reflects the opinions of the author.

Harry Chemay is a Co-Founder of Clover.com.au, a “robo-advice” Automated Investment Service that aims to engage Australians with their finances earlier in life. He has over 22 years of experience across both wealth management and institutional asset consulting.

An active participant within the wealth and superannuation space, Harry is a regular contributor to investment websites in Australia and overseas, writing on investing and financial planning.

Harry holds a Bachelor of Business (Banking & Finance) from Monash University in addition to post-graduate qualifications in both finance & SMSFs.

An avid cyclist since his teenage years, Harry is often found on the weekends riding around Melbourne’s hills. You can follow Harry on Twitter @HarryChemay .

Public support is vital so this website can continue to fund investigations and publish stories which speak truth to power. Please subscribe for the free newsletter, share stories on social media and, if you can afford it, tip in $5 a month.

$5 per month
$20 per month
$100 per month
SOURCE:  https://www.michaelwest.com.au/how-frankingcredits-delivered-victory-to-boomers-over-own-kids/