By Kylar Loussikian and Samantha Hutchinson

At this rate, it’ll soon be hard to find someone who hasn’t started legal proceedings against one of Premier Gladys Berejiklian’s transport bureaucracies.

Earlier this month, Transport Minister Andrew Constance agreed to fork out $576 million to settle claims made against his department by light rail builders ALTRAC and Acciona.

Then there’s the $400 million claimed by businesses along the light rail route who are alleging that project delays brought them financial ruin.

But here’s an unlikely duo who have decided to try to cash in — this time not against the light rail but against Sydney Metro: Opera Australia boss Rory Jeffes and wealthy car dealer George Altomonte.

Both are irate that the Valuer-General decided neither had the right to any cash in return for tunnelling under their properties.

Opera Australia’s claims are connected to its Alexandria warehouse which has allegedly been damaged during construction of the metro, which this week received the green light to begin boring under Sydney Harbour.

Opera Australia has engaged Tim Hale SC as part of its legal action.

On the other side of the water, in St Leonards, lays Altomonte’s site.

Altomonte, who has a lucrative sideline in horse breeding at his Corumbene Stud, has hired barrister Janet McKelvey, a legal advisor for Lendlease during its development of Barangaroo. 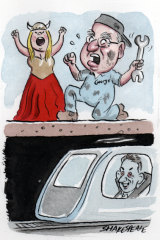