AND in 2004 was it at the behest of developers for the removal of home warranty insurance for buildings beyond four storeys?

THEN in 2012 the weakening of guarantees required to be made by developers and builders by the O’Farrell Government … ??

AS developers proceed to build apartment towers 60 storeys or more!

By Jacob Saulwick and Laura Chung

The “crisis” confronting hundreds of owners of apartments with defects in Sydney and NSW will not by resolved by the state government’s proposed reforms, lawyers say.

In the wake of the evacuation of the Mascot Towers block, the Berejiklian government said it would introduce new consumer protection legislation by the end of the year, and has started consultation over reforms.

*But lawyers in the field argue the proposed changes insufficiently counter the weakening of consumer protections for apartment owners and buyers over the past two decades.

*David Bannerman, a principal of Bannerman Lawyers, said his firm had acted for owners corporations’ in more than 300 claims over the past decade. He argued the restriction of home warranty insurance by the former Carr government to residential buildings below four storeys was at the root of much of the problems.

“Why does the government treat strata owners unfairly and as a sub-class of people just because they live in a building of four or more storeys particularly, given the stamp duty and other taxes rates are the same,” he said.

Paul Jurdeczka, a partner at Chambers Russell Lawyers, with nearly 20 years of experience in the area, said he did not think the government’s changes would “deal properly with the defects crisis facing NSW.”

“Structural flaws and cracks may not be common, but water leaks and fire safety defects are,” he said.

The thrust of the government’s reform package, further details of which were released by Better Regulation and Innovation Minister Kevin Anderson this week, is to tighten liability in building design and construction. The government proposed to register the “designers” of builders – such as architects, engineers and others who provide plans for the construction of apartment blocks.

And it proposes to introduce an industry-wide “duty of care” so subsequent owners of apartments can seek compensation for negligence on the part of a builder, designer or developer.

But Mr Bannerman said in the hundreds of claims he had made on behalf of owners’ corporations, in only 2 per cent of cases did a builder cross-claim against a designer.

“Rarely is it the designers’ fault,” he said.

*Mr Jurdeczka said: “Design is not usually the main cause of building defects; poor quality construction is.”

“Our managers deal with these buildings and owners who have to deal with the normalisation now of defects throughout strata,” he said.

“That normalisation has occurred through all of those consecutive erosions that have occurred.”

*As well as the removal of home warranty insurance for buildings beyond four storeys in 2004, another major change was the weakening of guarantees required to be made by developers and builders by the O’Farrell government in 2012.

*Lawyers also argue the industry practice among developers and builders of using $2 companies for individual projects helps them avoid liability, and is not directly addressed by the proposed reforms.

Banjo Stanton of Stanton Legal said that for strata buildings above three storeys in NSW “the current system has encouraged the widespread use of $2 companies and cutting corners which has led to a large increase in defect issues.”

In the absence of home warranty insurance, consumers were often left with no real redress, he said.

At a meeting on Thursday night, owners at Mascot Towers were told they could be out of the complex for a few months longer than they were first told. An engineer would not be able to deliver a comprehensive report on the cause of the cracks for another four weeks, they were told.

One resident said the information had calmed tensions.

“Last night made me feel slightly more positive,” he said. 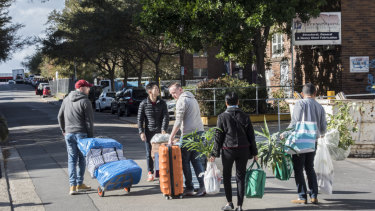 Laura is a journalist for The Sydney Morning Herald.