With Scott Morrison having announced his new cabinet, John Wren takes a closer look at some of the individuals selected.

THIS WEEK, Scott Morrison announced his new cabinet. Given that Australia just re-elected the most corrupt and incompetent Government in Australia’s history, the fact that a few bagmen, shysters, miscreants and the inept got guernseys should come as no surprise. It’s often been said that Coalition Ministers deliberately act against the interests of their respective portfolios, but seldom have the selections been so blatant. Let’s look at a few of them.

In order to gain pre-selection in the seat of Cook, he, with the help of Murdoch’s minions, initiated a nasty smear campaign against his rival, Michael Towkes. He couldn’t win fairly, so he won dirty. Sound familiar? Morrison’s recent budget included 3,000 (barely publicised) public service job cuts. He has named himself Minister for Public Services. Clearly, he will be acting against public services. Morrison’s win has clearly re-affirmed his faith in his Pentecostal God. His “burn for Australia”, “promise of Australia” and “have a go to get a go” rhetoric are all Pentecostalisms. What he turns to when it all falls apart will not be pretty.

First broken promise of new government – Melissa Price is NOT environment minister. Not a hint of shame. This is a post-truth government.

The PM has stamped his authority on the government with a reshuffle that elevates some of his closest allies and demotes his former environment minister.

23 people are talking about this

Along with Barnaby Joyce and Angus Taylor, Littleproud was heavily implicated in the Watergate scandal before the election. He’s now been made Minister for Water Resources. Morrison has put Dracula in charge of the Blood Bank. This will be seen as a win for water speculators but a disaster for anyone else, let alone actual irrigators who need competitively priced water to survive. Don’t expect the issue of the $80 million taxpayers paid to a mysterious Cayman Islands firm to be solved any time soon.

Inept before the election. Nothing has changed. As Treasurer, he finagled a surplus in the last budget that he didn’t think he’d have to deliver. Now he does. He also set some economic booby traps for the incoming Labor Government that he is now going to have to deal with himself. He also heavily defended the franking credits cash refund scheme which is rapidly expanding into a vast black hole sucking up all spare Government revenue. Frydenberg lacks both skills and political nous to walk this tightrope. He’s been set up to fail. Watch Morrison throw him under the bus in the next year or so when the fiscal chickens all come home to roost.

The Belgian Waffle as Finance Minister has a history of “accidentally” claiming travel for himself and his family that he’s not entitled to or forgetting to declare travel gifts made to him by grateful donors, like Helloworld. Anyone with a history like this in the private sector would have been terminated years ago. As a cyborg, it may not be his fault. He is programmed to repeat verbatim the Liberal Party’s daily talking points. He clearly has little additional R.A.M. space, so these talking points may use up valuable memory capacity.

The new Minister for Agriculture lives in the leafy affluent inner Melbourne suburb of Elwood. She is a faux-Nat who clearly has an aversion to farming. She does like guns, though. I understand she is renaming her apartment “Sandridge Station” as a re-branding exercise. Her new position will no doubt see her regularly in RM Williams boots and moleskins. Because we all know that’s what real farmers wear. 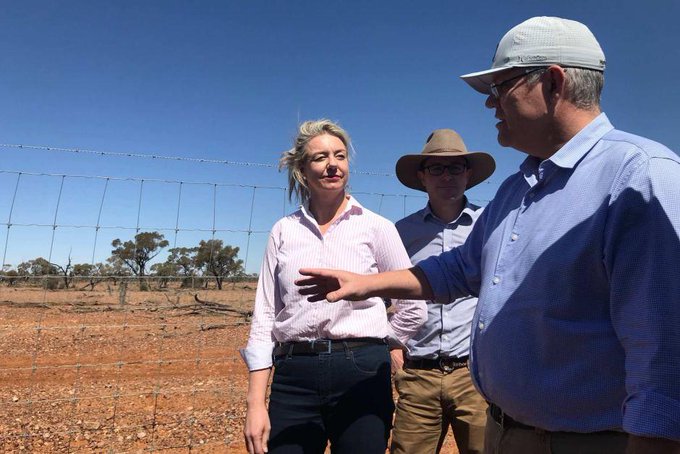 “I am a person of faith, so I do pray for rain but I also believe in the separation of church and state.” Australia’s first female agriculture minister, Senator Bridget McKenzie, considers practical drought responses: https://ab.co/2ECvyHm

As Treasurer in the last WA Liberal State Government, he oversaw an explosion of debt and spending incompetence. He saw the writing on the wall and jumped ship to Canberra before the Coalition’s ship sank in Perth. In the new ministry, he is both Attorney General and Minster for Industrial Relations. This is a clear sign the Government is about to really ramp up its war on unions and workers. As the country’s chief lawyer, he will use every legal avenue he can to restrict the activity of unions. Remember, unions are all that keep workers safe and paid a fair wage for a fair day’s work. Make no mistake, this dual role is a direct attack on Australian workers. This will be WorkChoices on steroids.

As Health Minister, Hunt will continue his war on Medicare. The political backlash of selling Medicare outright is too great, so he will continue his program of death by a thousand cuts. An outsource here, a funding cut there. Hunt is not the average Australian’s friend. Also, if you’re a middle-aged woman, keep your distance. He has a well-documented history of expletive-laden temper tantrums aimed at those just like you.

Once a fascist, always a fascist. Most of Morrison’s cabinet is simply inept or corrupt. Dutton is the one true monster. Make no mistake, he has his eyes on the prize. When it inevitably all goes pear-shaped for Morrison in the next year or so, once the true effects of his fiscal incompetence become clear, Dutton will make his move. Morrison’s Pentecostal deity won’t save him.

Tehan is an old-school class warrior. He believes public education should be about giving public students just enough education to be good worker drones. The managerial class (Liberal Party donors), of course, will all come from private schools, hence they will get the lions’ share of funding. And who can forget his attempt to tie funding of university research to the “national interest”, whatever that is?

Another thoroughly objectionable individual. As Minister for Small Business, she is going to have her work cut out for her. Under the Liberals, thousands of large businesses will end up small ones. She’s going to be busy and when it the going gets tough, you can always find Michaelia hiding behind the nearest whiteboard.

Stuart Robert and 4 more we can’t afford, including an annoying envoy

In the latest Cabinet reshuffle, newly appointed ministers have already been lauding the supposed “mandate” for the most objectionable of the Government’s policies.

79 people are talking about this

A climate change denier has been placed in charge of emissions reduction. Yes, you read that right. Angus also needs to come clean on his role in Watergate. It stinks worse than the rotting fish at Menindee.

The Minister for Coal who has already claimed a “mandate” to build a new coal-fired power station. Mandates don’t exist, of course, but even if they did, all he promised before the election was a feasibility study. Maybe his mum will tell him whether it’s feasible or not.

Regarded by many as the biggest grub in Parliament. Who can forget his fake/not fake Rolexwatches from a Chinese donor? Who can forget his attendance as a “private citizen” for a donor’s contract signing in China? Who can forget his monumental home internet bills, paid for by us? Clearly, Morrison has forgotten. This is just a straight “jobs for the boys” payback. Robert is a fellow Pentecostal and former housemate of Morrison, so he can clearly get away with anything.

Please also note that Robert’s portfolio is now Minister for Government Services and the NDIS. It used to be known as human services, but the name change should ring a warning. Those needing unemployment benefits or other social welfare support are now no longer considered human. There was another Right-wing mid-century European Government that coined the term Untermensch for these people. Just wait for Robert’s next slogan: “Work sets you free”. As a Pentecostal, he also believes in faith healing. He is now in charge of the NDIS. Words fail me.

These two are “junior ministers” but are worthy of a mention in this rogues’ gallery. Wood spent much of last year stirring up racism with his spurious African gangs rhetoric. He is now Minister for Multiculturalism. Colbeck, at age 61, is now Minister for Youth. This last one is on par with making a man Minister for Women. Only the Liberals could be so cynical.

It’s probably the worst cabinet ever assembled in Australia. Buckle up, it’s going to be a bumpy ride. This is what you voted for and you only have yourselves to blame.

Richard Colbeck, Australia’s New Minister For Youth, Is 61 Years Old
Senator Richard Colbeck has joined the Morrison cabinet as Minister for Youth — a portfolio that hasn’t existed in government since 2013

Senator Richard Colbeck has joined the Morrison cabinet as Minister for Youth — a portfolio that hasn’t existed in government since 2013.

189 people are talking about this

How could we be so complacent as a nation as to re-elect this Govt?
“In my view, the election proved the old psychological maxim that people feel much more passionately about what they may lose rather than what they may gain.”

The price of not paying attention: Five ministers we cannot afford

The Morrison Government, whose only motivation appears to be getting elected and maintaining the status quo, can do a lot of damage in another three years.