The office of the former environment minister Josh Frydenberg canvassed whether he had the power to water down federal protections for critically endangered grasslands and if it could be kept secret, following lobbying from a fellow minister, Angus Taylor.

Taylor and his brother have substantial rural interests on the Monaro plains, where the grasslands are prevalent.

In 2017, a company, Jam Land, in which both Angus and his brother Richard have a shareholding, was investigated by Frydenberg’s department for spraying 30 hectares of native grassland at Delegate in south-east New South Wales.

On Wednesday the Guardian revealed that Taylor, then the minister for cities and digital transformation, sought meetings with departmental officials to discuss the 2016 listing that protects the grasslands as a critically endangered community. 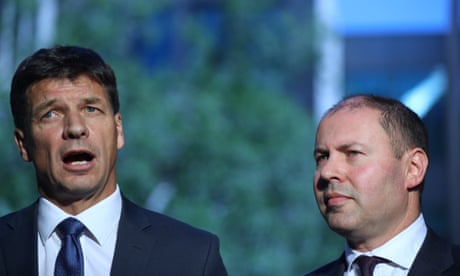 The approaches from Taylor were made via Frydenberg’s office in March 2017. They occurred just a day after Jam Land had met with compliance staff from the department over the alleged land-clearing and are detailed in documents released under a freedom of information request by the Guardian.

Email exchanges during March 2017 show Frydenberg’s office directed his department to meet with Taylor and specifically requested Monica Collins, the then assistant secretary of compliance, attend. The department says she did not go to the meeting.

By April the matter had escalated and an adviser in Frydenberg’s office was asking senior officers about what could be done to amend the listing of the species that was the subject of the investigation, the natural temperate grassland of the south-eastern highlands.

The Guardian can now reveal that the minister’s office wanted to know the full extent of Frydenberg’s ministerial power and whether he could override scientific advice and remove the “critically endangered” listing.

“Want to understand Minster’s powers and obligations. Need to know boundaries within which Minister can operate … Don’t read direction into questions,” a bureaucrat recorded in a handwritten note from a telephone conversation with the minister’s office dated 21 April.

“Could the minister alter the listing without Threatened Species Scientific Committee (TSSC) advice?” was the first question.

“No,” Oxley advised. “In making that decision the minister must have regard to advice from the TSSC and from public comment.

“Since the start of the EPBC Act the department is unaware of any instance where a minister’s listing decision for a threatened ecological community or species has been different to what was recommended by the TSSC.”

Oxley said that, if the minister asked the TSSC, it was unlikely the TSSC would come to a different conclusion given that Monaro grasslands had only been upgraded to critically endangered a year earlier.

The minister’s office also asked whether he could change the “condition thresholds” without TSSC advice. The advice was this was also impossible because these were published as part of the approved conservation advice.

“Condition thresholds” are the criteria used to judge whether a patch of native grassland is of sufficiently high quality to attract protection. The test involves a measure of the number of native species per 0.1 of a hectare to determine whether a site is protected. The aim is to exclude degraded areas or those overrun by introduced grasses.

“As mentioned previously, including to Angus Taylor MP, they are not the same as significant impact thresholds,” Oxley said.

Jam Land was being investigated at the time for spraying the 30 hectares with herbicide prior to replanting it with pasture.

Then there was a question about secrecy.

“If the Minister went against against TSSC advice, would the reasons for that have to be published?”

Oxley replied that since the start of the EPBC Act the TSSC had chosen to publish all of its analysis against listing criteria and its recommendations on the department’s website.

The revisions would also be open to legal challenge, Oxley advised, particularly as the TSSC had gone through significant public consultation before upgrading the grasslands to critically endangered in 2016.

When approached by Guardian Australia, Frydenberg declined to answer detailed questions about his involvement in setting up meetings for Taylor or his inquiry about using his power to downgrade protections for the grassland community.

In a brief statement he said: “In early 2017, the member for Hume subsequently sought a meeting to understand the impact on his constituents of the revised listing.

“Following the briefing and since, no changes to the listing have been made.”

Following the briefing and since, no changes to the listing have been made.

The ministerial code of conduct requires ministers, when taking decisions in or in connection with their official capacity, to do so “in terms of advancing the public interest – that is, based on their best judgment of what will advance the common good of the people of Australia”.

Taylor said he received the briefing in his capacity as the local member for Hume and the purpose was to understand the technical aspects of the revised listing and its impact on those affected, which included many constituents.

The critically endangered grasslands known as the natural temperate grassland of the south-east highlands are mainly found on the Monaro plains, which are not in Hume. However, some communities of the grassland are found in Taylor’s electorate.

“I did not make any representations to federal or state authorities in relation to any compliance action being undertaken,” he told the Guardian.

The email trail ends at this point but the criticisms of the native grassland listing by a Taylor family member did not.

In March 2018, Frydenberg announced a review into the interaction between agriculture and the EPBC Act. The review was undertaken by Wendy Craik, the former head of the National Farmers’ Federation.

“It is important that we get the balance right between protecting our environment and allowing our agriculture sector to grow and prosper,” Frydenberg said at the time.

Richard Taylor lodged a submission as a director of Jam Land. The investigation of Jam Land “has been a stark illustration of the lack of compatibility of the legislation with agriculture”, he said. “There has been no attempt to minimise the impact of the regulation on agriculture, or even to understand what that impact is.”

More than two years later, the investigation of Jam Land is described by the department as “ongoing”.

Monaro Farming Systems said “it can report based on member feedback a significantly low level of awareness of the NTG-SEH [grasslands] listing under the EPBC Act”. Richard Taylor is chairman of the group.

The NSW Farmers Association said: “The EPBC Act presents a considerable hindrance to productive farming for reasons ranging from poorly managed listings and poorly communicated requirements, to a complete lack of compensation for liabilities placed on landholders. Many listings make it illegal to perform basic agricultural land management, or stop invasive native species from spreading.”

The government has also cited the review as a reason to repeatedly delay decisions on two more ecological communities that have been recommended for either a critically endangered or endangered listing.

The Craik report was submitted to the government at the end of last year but has not been released.

The EPBC Act is due for for its regular decade review at the end of this year.

… has never been more concentrated, at a time when clear, factual reporting is so desperately needed. Guardian Australia will hold the new Coalition government to account and continue to report on the escalating climate emergency. We are editorially independent, free from commercial and political bias – this means we can promise to keep delivering quality journalism without favour or interference.

More people are reading and supporting our independent, investigative reporting than ever before. And unlike many news organisations, we have chosen an approach that allows us to keep our journalism accessible to all, regardless of where they live or what they can afford.

The Guardian is editorially independent, meaning we set our own agenda. Our journalism is free from commercial bias and not influenced by billionaire owners, politicians or shareholders. No one edits our editor. No one steers our opinion. This is important as it enables us to give a voice to those less heard, challenge the powerful and hold them to account. It’s what makes us different to so many others in the media, at a time when factual, honest reporting is critical.

Every contribution we receive from readers like you, big or small, goes directly into funding our journalism. This support enables us to keep working as we do – but we must maintain and build on it for every year to come. Support The Guardian from as little as $1 – and it only takes a minute. Thank you.