“We really need those three levels of government with leadership from the Federal Government to start to provide a supply of social housing.  The last injection we had was in the context of the GLOBAL FINANCIAL CRISIS and around the 2008 period – that’s a long time ago!”  With a growing number of young and elderly women suffering …

*From 2011 to 2016, the number of people without stable housing in Australia increased by almost 14 per cent.

Which also happens to coincide with Federal Government policies:

-allowing developers to sell 100% of ‘new homes’ to foreign buyers

-the second tranche of the Anti-Money Laundering Legislation for the Real Estate Gatekeepers having been shelved for more than 12 years!

WHY is the Federal Government not tackling the problems whilst at the same time governments (and employers) are:

-suspiciously fail to introduce further Anti-Money Laundering rules to address an underlying weakness in the structure of our economy?

.the Scomo Government exempted the Real Estate Gatekeepers as recently as October 2018!

AND with the Housing Boom particularly in New South Wales and Victoria due to the competition from foreign buyers rendering housing unaffordable for many Incumbents!

Discussions about housing affordability have frequently omitted those who are most severely affected by the crisis: people experiencing homelessness.
Advocates in the homelessness sector are calling on the government to act. By Santilla Chingaipe.

Helen* moved to Melbourne from Adelaide in her late 30s for further study, excited about the opportunities that lay ahead of her. That soon changed when she realised how unaffordable the rental market was.

“I wanted to study at La Trobe, thinking I’d be easily housed because they had student accommodation and I didn’t have any real plans,” she says. “I realised quite quickly that wasn’t the case.”

Helen soon found herself moving around looking for a place to stay, instability that would see her end up in a homelessness service while struggling with mental health issues and an undiagnosed addiction. The homelessness service found Helen a place in women’s housing, but it didn’t work out.

“I couch-surfed until emergency accommodation became available and stayed there for a while,” she says. “Then got a transitional house for three months, and I moved into a bedsit, which was a better fit for me because I was in recovery.”

Helen says she had no idea she was homeless during that period.

“I didn’t make that connection because I thought, ‘I have somewhere to stay.’ I didn’t understand what the definition of being without a home was. I was also caught up with keeping up with my studies and it didn’t gel,” she adds.

Helen stayed at the bedsit for two years until a place became available that she could move into and she was relieved about finally having somewhere to call home. “I didn’t think I’d get it because I’d been knocked back for a whole range of reasons,” says Helen.

All told, the process of securing stable public housing took her about 10 years. And while things have turned around for her, an increasing number of young women are finding themselves in a similar situation. In Victoria, there are currently more than 80,000 people on the waiting list for public housing.

According to census data collected by the Australian Bureau of Statistics (ABS) in 2016, on any given night across Australia, 116,427 people are experiencing homelessness – nearly 46,000 of them women. And this is likely an undercount.

It is estimated that 20 per cent of Australia’s homeless population lives in Victoria, where data shows some 10,432 women are without shelter.

“WE HAVE RELIED ON DECADES-OLD PUBLIC HOUSING, WHERE THE STOCK HASN’T INCREASED SUBSTANTIALLY. BUT WE ARE REALLY LAGGING IN SOCIAL HOUSING, LAGGING IN CO-OPERATIVE MODELS OF HOUSING.”

Homelessness is defined by the ABS in this way: “When a person does not have suitable accommodation alternatives they are considered homeless if their current living arrangement is in a dwelling that is inadequate; or has no tenure, or if their initial tenure is short and not extendable; or does not allow them to have control of, and access to space for social relations.”

*From 2011 to 2016, the number of people without stable housing in Australia increased by almost 14 per cent.

Women over 55 now represent the fastest-growing group of people experiencing homelessness in the country.

In the wake of the killing of Melbourne woman Courtney Herron last weekend, which has brought the national spotlight onto the issue of young women experiencing homelessness in Victoria, advocates in the homelessness sector are calling for more to be done to address what they say is a nationwide housing affordability crisis.

Friends and family have painted a picture of Herron as a trusting, loving person who found herself facing mental health and drug use issues, and housing instability in her early 20s. Friends have told the media the 25-year-old was couch-surfing and sleeping rough, trying to get into public housing.

“The tragic death of Courtney Herron comes in the context of a housing affordability crisis right around the country. It’s not something that is specific to Victoria,” says Jenny Smith, the chief executive of the Council to Homeless Persons and the chair of Homelessness Australia.

“The reality of it is, 288,000 different people are fronting up to our homelessness services every year and half of them are women.”

Herron’s death also comes in the context of the national issue of violence against women – she was the 20th woman killed by violence in Australia this year, according to the Counting Dead Women project.

Jeanette Large is the chief executive of Women’s Property Initiatives – an organisation that provides long-term subsidised housing for women and children in Victoria. She says that compared with the number of men, the number of women accessing homelessness services has increased at a greater rate.

According to the Australian Institute of Health and Welfare, 57,000 women experiencing homelessness accessed these services in 2017-18, a spike of 36 per cent from 2013-14. The increase in the number of men was 27 per cent.

Large says the majority of women affected are in the 25- to 40-year-old category, with 40 women turned away every day in Victoria.

Mary Crooks, the executive director of the Victorian Women’s Trust, points to the fast-growing number of older women experiencing homelessness.

“There’s also an increase in the numbers of older women – women in their 50s, 60s, and beyond – and there are predictions that may well increase unless there are substantial interventions,” she says.

Crooks says there are many intersecting factors, including the large proportion of women who are relatively economically insecure.

“If you don’t have any buffer in savings or superannuation, all it takes is for one or two things to go pear-shaped and you’re down a slippery slope.”

Domestic violence also plays a role, as does underinvestment in public and social housing by successive governments.

“We have relied on decades-old public housing, where the stock hasn’t increased substantially. But we are really lagging in social housing, lagging in co-operative models of housing,” says Crooks. “When older women or younger women need safe housing they don’t necessarily need three- or four-bedroomed houses. There’s a lot more imagination in investment required in social housing [that’s] fit for purpose, instead of following an old formula.”

Smith agrees with Crooks, but argues the debate around housing affordability is dominated by discourse about first-home owners and investors and neglects those on lower incomes.

“The market in Australia is complex and affects ordinary people. Then we have to recognise that through the last three decades of growth in our country the private property development industry has not taken care of people on low incomes and government has got out of [the] business of providing social housing,” she says. 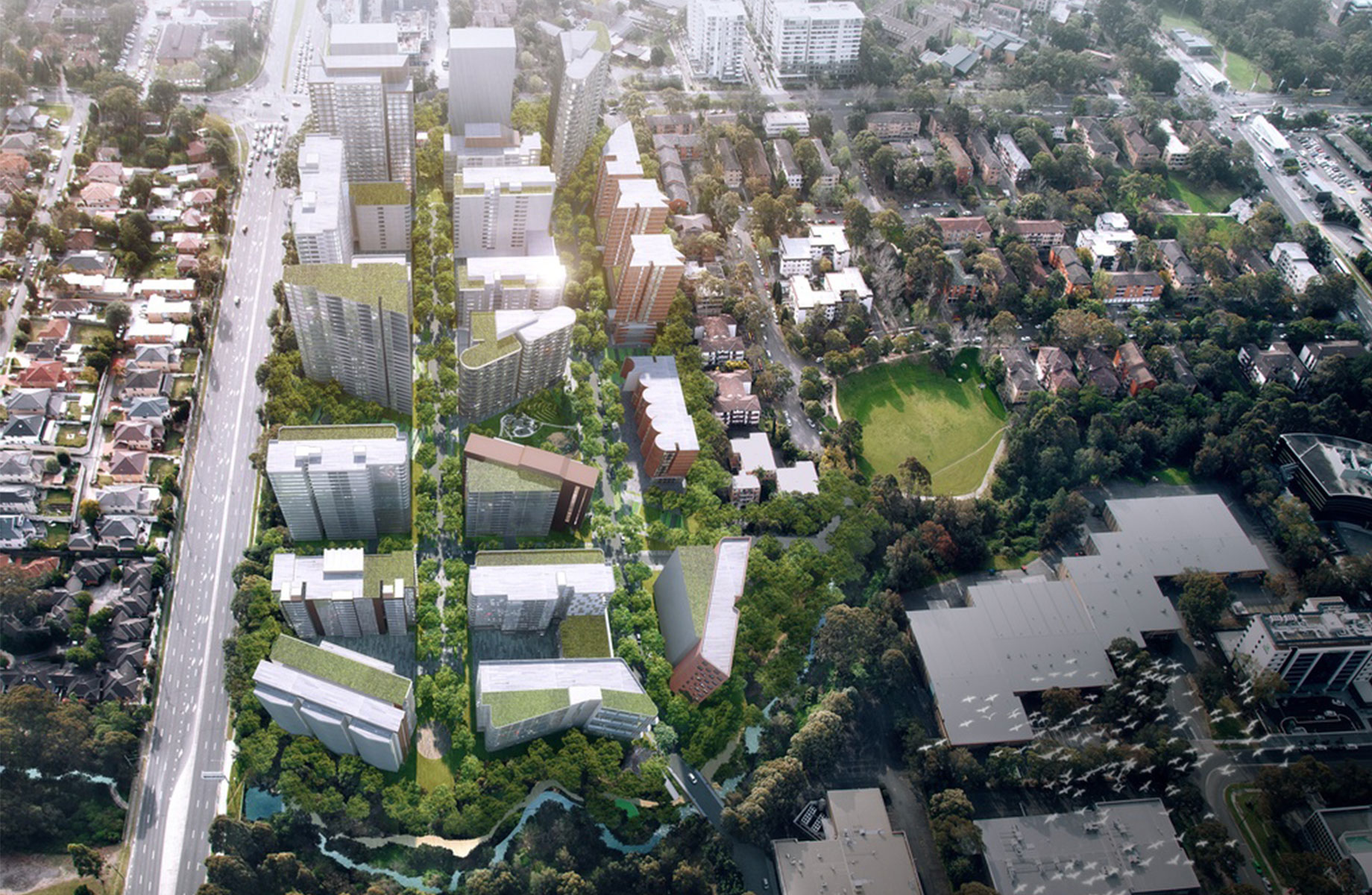 Photo: The Urban Developer. Ivanhoe Place was an architect designed estate for a mere 25 years when it was sold off for private development. 3500 dwellings are planned of which 740 dwellings include affordable housing and 259 social homes; to be developed over 10 years

Smith says many people are quick to point to social problems with individuals to explain homelessness.

“We really struggle to connect the fact that housing is just not affordable to people on low incomes with our homelessness crisis. We seem to move more quickly to ‘is it a problem associated with a complexity with the person we’re looking at? A mental health problem or a drug and alcohol problem?’ – those sorts of complexities, rather than recognise that those difficulties are likely to make you poor,” she adds.

After spending several years homeless herself, Helen agrees that there are many misconceptions about why people end up without stable housing.

“I had these [mental health and addiction] issues before I found myself homeless, but it escalated because of that,” she says.

Helen says many people experiencing homelessness are usually struggling with other social problems.

“A lot of the times, housing is seen by itself. It’s not connected to your health and mental wellbeing. Those people deemed without a home for a long time have more than one issue going on. It’s not just they don’t have anywhere to live,” she says.

Smith says it is a misunderstanding that social housing is a state government issue.

She argues that all levels of government need to play a role in addressing the housing crisis.

“Our history in producing social housing has always been that the federal government provides that funding to the states and territories and usually asks them to match it. It’s done as a partnership and then local government comes to the party by providing land or planning concessions,” says Smith.

According to the Council to Homeless Persons, social housing makes up about 5 per cent of all dwellings in Australia, while in Victoria that figure sits at 3.44 per cent.

The Victorian minister for housing, Richard Wynne, told The Saturday Paper that the Andrews Labor government has committed more than $200 million for 1000 new public housing properties, which will house 1800 people.

He said the government has also committed more than $50 million in the state budget for homelessness services.

“We know family violence is a major contributor to homelessness – so this budget invests an additional $23.9 million to prioritise women and children escaping family violence and ensure they continue to receive the housing support they need,” Wynne said.

The new funding in the Victorian budget follows on from a $45 million homelessness and rough sleepers’ package announced in 2018, aimed at putting teams of outreach workers and supportive housing teams across the state and providing additional accommodation units and onsite support.

While Smith welcomes the investment, she says it is nowhere near enough to address the issue.

“Through history, Victoria has one of the lowest proportions of social housing in the country and that investment won’t stop us slipping further behind,” she says.

And for women who are vulnerable, as Helen once was, access to long-term housing makes it easier to get their lives back on track.

“My mental health has improved,” Helen says, since finding a place to live. “It hasn’t been an easy time but … I’ve had a lot of support behind me.”

This article was first published in the print edition of The Saturday Paper on Jun 1, 2019 as “Home remedies”. Subscribe here.