WHAT price a life?  Is there such a thing as a completely bug-free computer system?  Anywhere?

Oh, and Skip the first carriage …

Several incidents bedevilled Sydney’s new North West Metro on Wednesday including a breakdown, a failure of live transport data and incorrect announcements that train doors were closing on a moving train.

The most severe hiccup on the metro’s fourth day of operations occurred when a driverless train stopped moving between Epping and Cherrybrook after it lost communication with the network’s control system at about 12.50pm.

A customer journey coordinator (a driver?) on board took control of the train and drove it to Cherrybrook.

When the train arrived at Cherrybrook, the doors initially failed to open, Nine News reported, but customers were eventually able to disembark and the faulty train was taken back to the depot at 1.14pm for testing.

A replacement train was dispatched about 20 minutes later, but a Transport for NSW spokesman said there were some delays as a result of the incident.

Frustrated commuters posted images of packed platforms and crowded trains as a result of the day’s issues. 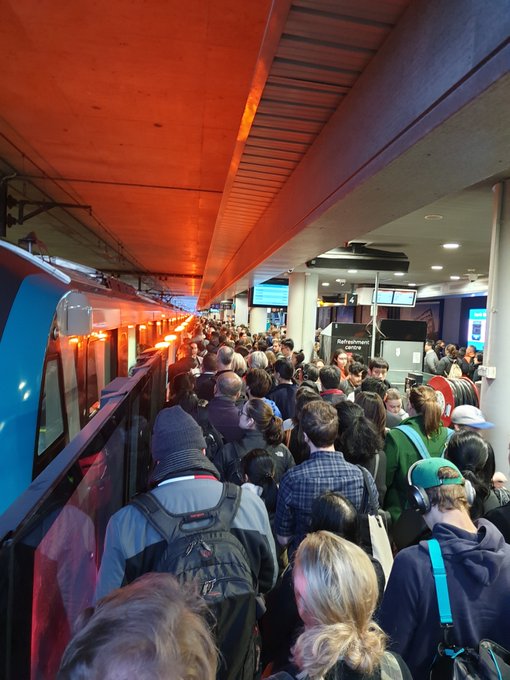 Passengers on another train travelling between Epping and Macquarie University heard a repeated announcement instructing them to “please stand back from the closing doors” while the train was in motion.

Commuters attempting to cope with the disordered metro system were given little information as live transport information went down in the afternoon.

Passengers were delayed by 20 minutes when doors on the new Metro line wouldn’t open.

When the data was available, commuters reported on social media that trains were running at intervals of up to about 30 minutes.

A Transport for NSW spokesman said at about 5pm the network was expected to have recovered in time for the afternoon peak.

The incidents were a far cry from the smooth operations the new metro enjoyed on its first few days, when it handled a greater than expected number of passengers without obvious strain.

Nick is a journalist for The Sydney Morning Herald.