“Truth in political advertising laws would enable the public to have more confidence in what they were seeing,” said Ben Oquist to the Guardian Australia.

“Unless action is taken, election campaigns risk sliding into a fake-news free-for-all with no bottom.

“Obviously political campaigning needs to be strong and robust, but it is time to have a fresh look at the system.”

Carol Que was near Weeden Heights primary school in Melbourne’s eastern suburbs when she saw it.

A sign, mimicking the purple theme of the Australian Electoral Commission, hung near her family’s local polling booth, delivering a Chinese-language message to voters. 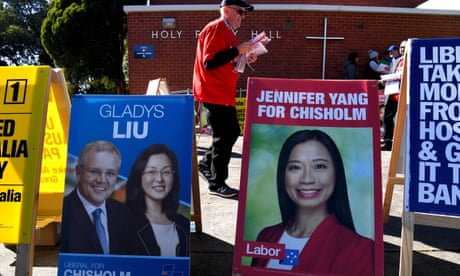 “Correct way to vote: on the green voting card, put preference 1 next to the Liberal party,” the sign read. “The other boxes can be numbered from smallest to highest.”

Que, an organiser with the activist group Anticolonial Asian Alliance, was sickened. The sign, authorised by the Liberal party, was a “condescending”, “cowardly” and “predatory” attempt to trick voters, she said.

Most younger Chinese Australians would have been too savvyto fall for it. But Que fears older migrants, and potentially those from Hong Kong and Taiwan, may have been duped into directing their vote.

“The sign is designed to deceive and manipulate the ‘ethnic vote’,” she told Guardian Australia. “Not to mention it is just another part of the Liberal party’s propaganda tactics, mostly waged on Weibo.”

Similar signs were found at booths in Kooyong and Chisholm.

*The Australian Electoral Commission, which is bound by highly prescriptive laws, said it was powerless to act.

*The high court has ruled it has no remit to stop content that misleads a voter on who to vote for.e

*It can only act on “conduct which affects the process of casting a vote”.

*As long as the signs were properly sourced and six metres from the polling place, they were fine to stay, the AEC ruled.

*It was perhaps the most egregious example of deceptive political advertising to surface during the campaign, and raised questions about the powers parliament has afforded the AEC to prevent misleading and deceptive conduct.

The case – and a string of other campaign incidents – also helped jumpstart the debate on truth in political advertising. 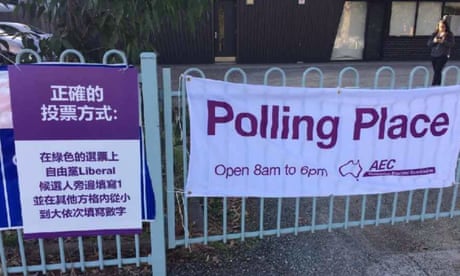 The Australia Institute executive director, Ben Oquist, has called for an inquiry into how truth in political advertising laws could be implemented in a way that is constitutional and fair.

“Truth in political advertising laws would enable the public to have more confidence in what they were seeing,” Oquist tells Guardian Australia. “Unless action is taken, election campaigns risk sliding into a fake-news free-for-all with no bottom.

“Obviously political campaigning needs to be strong and robust, but it is time to have a fresh look at the system.”

The problems with such reforms are obvious. How does a government intervene to stop falsehoods without unfairly or unconstitutionally gagging political discourse?

And how could such laws be enforced with the speed needed to make them effective, while balancing the need to make fair and considered judgments on complex and contested issues of truth?

Perhaps most problematic of all is how such laws could be applied to social media, where accounts and posts can disappear and reappear in the blink of an eye.

Michael Maley, a former AEC official, says there are “real issues with trying to define truth” – particularly in relation to statements about the future.

“Is it the case that politicians have a legal right to be believed when they say they don’t have a plan to do something?

“In 2013 Tony Abbott said there would be no cuts to the ABC or SBS – he denied [the cuts], so does that mean you can’t say any more about it?” 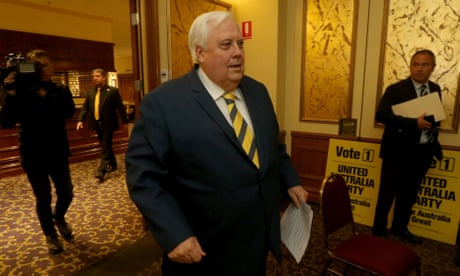 History shows reform in this area does not come easily. In 1983, the federal government regulated for truth in advertising.

A year later, the laws were dumped. A bipartisan committee declared them unworkable. Political advertising involved “intangible ideas” not readily subject to a test of truth, it found.

The laws were not able to grapple with predictions or opinions, and parliament feared the parties could misuse injunctions to disrupt their opponents’ campaigns.

Len Keogh, a Queensland Labor MP, instead urged his colleagues to hold themselves to a better standard.

“With the repeal of these amendments, the onus for fairness and honesty in political advertising is put directly on candidates and political parties,” Keogh told parliament in 1984. “I certainly hope that a sense of responsibility to inform the voter correctly about real issues will prevail in the forthcoming election campaign. We must not allow the situation to develop … in which the opposition, desperately short of policies, is likely to mount the same sort of slanderous campaign on this occasion.”

Keogh’s pleas fell on deaf ears. In the decades since, scare campaigns have been deployed regularly, including by his own side. In this year’s election, the United Australia party used its vast advertising spend to spread a lie that Labor would introduce $1 trillion in new taxes.

Fringe Facebook groups claimed Labor was planning a “death tax”, a lie that was later fanned by Coalition figures. The Liberals paid for ads claiming Labor was planning a “car tax”, despite the party holding no such policy. Real estate agents wrote to tenants warning them, falsely, their rents would go up due to Labor’s negative gearing policy.

Labor is not innocent of propagating falsehoods. At the 2016 election, it ran the infamous and effective Mediscare campaign against the Turnbull government.

The mistruths and deceptions do little to arrest flatlining public trust in politics. Last year, University of Canberra researchers found fewer than 41% of Australian citizens were satisfied with the way democracy works, a dramatic fall from 86% in 2007.

South Australia remains the only jurisdiction to enact truth in advertising laws, but they are limited. Last year, in the heat of the SA election, the state electoral commission used the laws to rule that government claims about energy bill savings were untrue.

The ACT briefly considered truth-in-advertising following its 2016 election, but concluded they were impractical and open to political exploitation.

Emeritus professor Marian Sawer, a political scientist with the Australian National University, says a major problem is that enforcement bodies such as the AEC are understandably reluctant to be “dragged into partisan controversy”.

Sawer says another solution would be more effective: a limit on campaign financing.

“I continue to believe that one of the best ways to stop us all drowning in a sea of negative advertising during election campaigns is through caps on campaign expenditure,” Sawer says.

It’s an argument made more timely by Clive Palmer’s $60m intervention in the campaign, which he admitted was aimed at depressing Labor’s vote.

There is a constitutional hurdle to clear. In January the high court upheld a challenge from Unions New South Wales, striking down a NSW law halving the amount third-party groups can spend on state campaigns from $1.05m to $500,000.

*The majority found a spending cap was not “reasonably necessary” to prevent drowning out other voices in the political process.

The secretary of the Australian Council of Trade Unions, Sally McManus, has labelled the amount of money spent by Palmer on the election “a perversion of our democracy”.

She defends unions’ role in striking down a law that “stopped working people banding together” but says the movement must now “revisit” the issue of donation and spending caps.

“It’s just not right that a billionaire can spend what for them is small change on influencing democracy.”

It’s up to parliament

Sawer says there is a clear argument that the AEC should at least be given the power to stop political campaigners mimicking it.

“While the Commonwealth Electoral Act is already 639 pages long, I do think there should be a prohibition on political advertisements pretending to be from the Electoral Commission through use of the same or a very similar Pantone, as in Chisholm,” she says.

The losing independent in Kooyong, Oliver Yates, has said he may take the case of the Chinese-language signs to the court of disputed returns. His lawyers believe they gave an “emphatic direction on how to vote” and used language indicating voters did not have a choice.

“There is a very real risk the reader would think they are being told by the AEC that, to record a valid vote, they must vote 1 for Liberal,” Yates’s lawyer, Michael Bradley, says.

Que and the AAA fiercely opposed Gladys Liu – the Liberals’ successful Chisholm candidate – and remain furious that she benefited from the tactic.

Even without a legal challenge, the issue is almost certain to be explored in the standard election inquiry held by the joint standing committee on electoral matters.

The AEC itself has repeatedly stressed it can only act within the bounds of “highly prescriptive” laws. Changing the legislation, it says, is up to parliament. 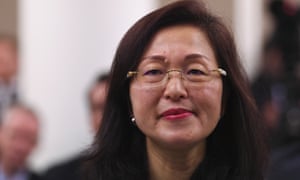