IS it to hell with …

IS it still all about …

Sydney property prices to rise by end of 2019, analysts predict

Leading property analysts believe the Sydney market will bottom out by spring and hit positive territory by the end of the year, on the back of a “confidence boost” from the Coalition’s surprise election victory.

Forecasts for Sydney’s property market, which has dropped 14.5 per cent since its 2017 peak, had outlined falls due to market softness and uncertainty around Labor’s proposed negative-gearing policy.

However, the coalition’s surprise victory on Saturday came as the Reserve Bank yesterday gave its strongest indication yet an interest rate cut will come in June.

It came as the Australian Prudential Regulation Authority (APRA), the banking regulator, yesterday proposed a relaxation of lending restrictions.

Property analysts told the ABC it was likely to bring back confidence to the Sydney market, with prices “bottoming” by spring and moving into positive territory by the end of the year.

CAAN:  Is it to hell with First Home Buyers?

One analyst went as far to suggest the three elements together — along with the “negligible” effect of the Coalition’s first homebuyers scheme— may trigger an “unwelcome new boom” in Sydney as starved property speculators jumped back into the market.

“Before the election it was clear buyers were sitting on their hands,” SQM Research chief executive Louis Christopher said.

“I was attending a lot of auctions in Sydney and there was lots of uncertainty, and we had a very low number of listings.

“With the election we were predicting a return of confidence just if the Coalition was re-elected, so the combination of these other factors this week has been a boost to forecasts.”

Prices are at their lowest levels since 2017.

The new conversation around interest rates, which have been held on a record low of 1.5 per cent since the last cut in August 2016, is seen as one of the many factors behind the predicted confidence boost.

A 25-basis-point cut in June — as flagged by Governor Philip Lowe yesterday — would take the RBA’s cash rate target to a record low of 1.25 per cent.

APRA’s plan to loosen requirements for banks to use a minimum 7 per cent interest rate when assessing borrowers’ ability to service loans will represent a substantial easing of credit standards for new borrowers, analysts predict.

Mr Christopher said although there were lots of “ifs”, such as whether the banks would pass on the interest rate reduction, this week’s combination of factors should trickle down into Sydney’s lethargic property market.

“The expectation is that we will bottom out soon in Sydney, around the September quarter, with prices turning positive by the end of the year,” he said.

*”It may even end up with an unwelcome new boom in Sydney, but there are a lot of ‘ifs’ still to play out.”

Flood of homes for sale

CoreLogic figures show there are more properties for sale on the market than at any time since 2012, and few buyers.

This was backed by My Housing Market chief economist Andrew Wilson.

Mr Wilson said the policies and the Coalition’s victory would eventually create a “more rational” view of the property market.

“We were already starting to see green shoots,” Mr Wilson, an independent commentator and former chief economist at Domain, said.

“There was no doubt that [auction] clearance rates were trending up and pricing models were showing a slowing in the rate of decline.

“But we’re coming off a very low base and there is an extremely low rate of property on sale in the market.”

Mr Wilson said he was taking a “wait and see” approach over the coming months.

“We’ve got peak supply of apartments right now, there’s lots for sale out there,” he said.

*”And the cutting of rates is always a double-edged edged sword — it’s a positive for housing affordability but signals a growing concern over the state of the economy.” 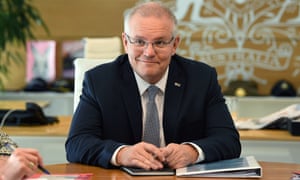 ‘If the RBA does cut rates next month, it is not because things are going well, but because it believes anything the government is planning on doing – including tax cuts, will not be enough’ Photograph: Joel Carrett/AAP;
https://www.theguardian.com/business/grogonomics/2019/may/21/we-need-more-than-confidence-to-improve-the-sad-state-of-affairs-the-economy-is-in