The Labor Party has been dogged by a scare campaign claiming it will secretly bring back a death tax, with messaging targeting conservative voters across Australia gaining traction only days from the federal election.

The tax, which is also known as death duties or an inheritance tax, is a deeply unpopular measure used by governments of the past to take a cut of someone’s estate when they died.

It was killed off in the 1970s, but a number of senior Australian politicians are pushing the scare campaign in the hope of winning votes.

Labor has consistently rejected any notion that it will introduce a death tax but has been plagued by the issue nonetheless, in the same way the Coalition was targeted with the successful Mediscare campaign in 2016.

Do you know more about this story? Email investigations@abc.net.au.

The ABC’s You Ask We Answer project has received multiple enquiries about whether any party intends to introduce a death taxes policy.

The latest stoush in the scare campaign occurred last weekend at Agfest, a major agricultural festival in Tasmania.

In a video posted to her Facebook page, One Nation leader Pauline Hanson can be seen telling people at the festival that Bill Shorten and Labor would reintroduce a 40 per cent death tax if they stormed to power.

“Well, I don’t think that’s right for them to do because that’s our money for our kids and their generation,” said one woman interviewed in the video.

“Oh that sucks, really? I think the kids should get everything of what we own when we pass away,” said another man.

“I really think they need to rethink that,” a separate woman said.

Ms Hanson’s video has attracted about 4,000 shares and more than 1,500 comments.

Meanwhile, in Queensland, Colin Boyce, a state Liberal National MP, has paid for a Facebook advertisement featuring an old news story to stoke fears about the tax.

Facebook users targeted by the sponsored post see a screenshot of a provocative Daily Telegraph headline — “Unions want tax on inherited ‘death’ money” — from a story that is over a year old.

“I have used my own money to boost this post of the Daily Telegraph’s news article so that people of Australia think carefully about who they vote for,” Mr Boyce told the ABC.

It’s unclear how many people have seen the advertisement, but a corresponding Facebook post with the same content was shared more than 5,000 times and attracted about 3,600 comments.

At a federal level, the death tax has given Coalition MPs a powerful soapbox issue.

Treasurer Josh Frydenberg, Corangamite MP Sarah Henderson, Hughes MP Craig Kelly, and Senator Jane Hume have all posted about the tax on social media in the lead-up to and during the election campaign.

Queensland Coalition MP George Christensen is perhaps the most prolific, mentioning it almost daily on his Facebook page since April 22, 2019.

It understood the Coalition campaign considers sponsored Facebook posts to be the responsibility of individual candidates.

Throughout the campaign, the ALP’s stance on the issue has remained consistent and clear.

How are you being targeted this election?

In an interview on Sydney radio station 2GB in April, Labor’s assistant shadow treasurer Andrew Leigh, who once wrote in favour of the tax, was at pains to stress the party would not be implementing one.

“Inheritance taxes died at the federal level 40 years ago in 1979. Labor has no plans to bring them back,” Dr Leigh said.

“Thirteen years ago I was an academic floating ideas. Now, as a policymaker, I’ve been asked repeatedly my views on inheritance taxes, death taxes over the years.

“A Labor government will not reinstate inheritance taxes.”

Michael Jensen, a political communication expert from the University of Canberra, said death taxes were “strategically wheeled out” and targeted at soft Liberal voters approaching retirement.

He said the tactic also resonated among groups like One Nation voters.

“Those anti-establishment voters don’t trust politicians generally and so when Labor and when the Greens say, ‘We have zero plans to bring it back,’ these are people who are already primed not to believe those denials,” he said.

… re able to gain traction in the political system by saying, ‘I’m the only one who tells you the truth'”

“Any of us can be radicalised through the consumption of information online or anywhere else, so it’s theoretically possible that other folks might be convinced that this is something likely to come down the road if Labor were to gain power.” 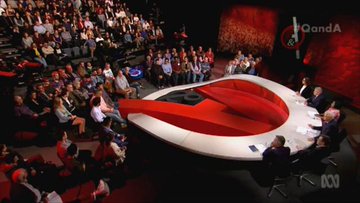 Will a Labor Government “change the playing field” and “tax the daylights out of my retirement savings (super)”? #QandA

Labor has tried to go on the offensive with MPs Tony Burke, Richard Marles, Jason Clare, Chris Bowen and Anne Stanley suggesting the Prime Minister has not ruled out the tax, but it has failed to gain as much traction.

A Labor campaign spokeswoman accused the Coalition of peddling lies.

“They have no positive agenda to put forward to the Australian people, so they are just running a negative campaign based on lies,” she said.

One Nation did not respond to the ABC’s requests.

A Facebook Australia spokesman said the social media giant was “committed to protecting the integrity of elections in Australia”.

“We have a productive relationship with the Australian Electoral Commission and have an established dedicated escalation path for the AEC to notify us of any advertising content that violates the Electoral Act. When this happens, we will block the content out of respect for local law,” he said.