IT would appear much of what Liberal Candidate for Chisholm, Gladys Liu has said incites racism within her community and Electorate AND was contrived to deliberately unite the Chinese community behind her.

The comments are hateful and it would appear menacing …  one must question the suitability of such a candidate?

*Liberal candidate Gladys Liu has denied she favoured Chinese migrants in comments from 2016 that suggested “not as good migrants” from other countries were less hard-working, had too many children and lived off welfare after coming to Australia.

Liu, who is standing in the Melbourne seat of Chisholm, made the previously unpublished 2016 comments in answer to a question in a Guardian Australia interview about attitudes among Chinese-Australians towards crime in Melbourne and other migrant communities.

“They blame those migrants who are not as hard-working as the Chinese, not as disciplined in terms of respect for others,” Liu said.

“They do distinguish themselves from those not as good migrants, if you know what I mean. Because there are different kinds of migrants. Some are very hard-working, do everything well for the family, for the country. Whereas others they just come in, and they reproduce, and have many children, and they take welfare from the government.”

Her comments were made amid widespread media coverage of Melbourne’s so-called Apex gang, a loose group which included a number of people of African background.

In May 2016, six Chinese international students were attacked and robbed in their home in Ormond by a group of young African men. According to the Chinese-language publication Sydney Today, Liu spoke on their behalf to Dandenong police to retrieve their property. Liu has verified her involvement.

In the Sydney Today story, Liu linked the robbery to wider fears of crime and said students were “soft targets”.

“International students being mugged in their bedrooms is linked to the recent security issues within Victoria. In recent times the Apex gang have become bolder, they are pretty much out of control. The police have no way of controlling, they go around destroying and mugging,” she said, in quotes that have been translated.

On Sunday, Liu said she was merely passing on views that had been expressed to her by members of the community.

“In 2016, I was asked about the Chinese-Australian community’s safety concerns in Chisholm. I responded with comments I had received from members of the Chinese community, who had been victims of crime. We welcome migrants from all over the world but encourage them to abide by our laws.”

Liu was in the spotlight earlier in the campaign when audio from the same 2016 interview showed she had attacked the Safe Schools program and described LGBTI issues as “ridiculous rubbish”, contradicting her claim in an earlier candidate forum that the Guardian’s reporting of her words was “fake” and “wrong”.

She later expressed support for equality and said she was reporting the Chinese community’s views. In the 2016 recording, Liu, who was then the communities engagement committee chairwoman for Victoria, also claimed Labor policies would open the gate for refugees, which she said the Chinese community linked to safety.

“People are so frightened about safety and they relate that to immigration policy … [They] blamed Labor for letting some immigrants come in, especially the refugees, and they just don’t like that policy.”

At the 2016 election, Chisholm was the only Labor-held seat to fall to the Coalition. The victorious Liberal, Julia Banks, has since quit the party to run as an independent against the health minister, Greg Hunt, in the seat of Flinders.

On Saturday the UTS sociology professor Andrew Jakubowicz told the Saturday Paper that east Asian votes influenced by religious-based conservatives effectively won the 2016 election for the Coalition, naming Chisholm as one of three crucial seats.

Almost 44% of Chisholm residents were born overseas and almost 20% of residents have a Chinese background.

On Saturday Liu spoke at a Chisholm candidate forum organised by the Australian Christian Lobby at Crossway Baptist church.

Yang was also scheduled to speak, but pulled out.

Liu said Crossway – one of the largest evangelical churches in Australia – was where her children came to meet God and be baptised.

In a question and answer session, she said she felt “extremely uncomfortable” with late-term abortion, as the mother of two children. 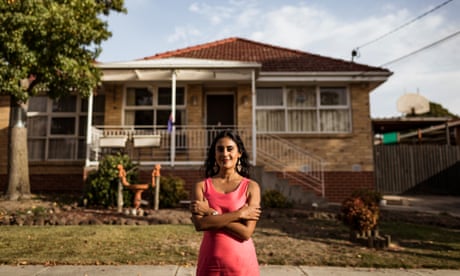 Winning middle Australia: path to a Labor victory may run through Deakin

Asked about her current position on Safe Schools, she said her position was clear and that she had been involved in organising the presentation of petitions against the program to the Victorian parliament.

“The thing is – [Safe Schools] is not a proper program in a sense that it is not about anti-bullying. What we suggest is – or what I think – is we should have a real, true anti-bullying program. Everyone should be treated with respect but we do not want our children to prematurely be introduced with the contents of things that are not appropriate to the age.”

She received strong applause from the forum audience.

“Sadly, I’m sure, all of you here remember when Pauline Hanson had something to say about people like Jennifer and I. Remember? We were all going to be swamped by Asians. And now Scott Morrison is doing deals with Clive Palmer, a bloke who in 2014 described the Chinese as bastards and mongrels,” Wong said.

Wong said Banks had been “replaced by a Liberal candidate who, frankly, has been prepared to do and say anything, including saying things which are not true, in order to get herself elected”.