WHAT Michael Liu had uncovered was a volunteer-run social media campaign conducted entirely in Chinese, designed to hurt Labor.

The Architect of that scheme was GLADYS LIU, the Liberal Party communities engagement committee chairwoman for Victoria

EQUALLY it can be said what Australians are witnessing is Our Democracy is being ‘destroyed’ … and our quality of life too!

Melbourne groups on WeChat – the Chinese Facebook – were lighting up with pro-Liberal posts and articles.

In group chats of up to 500 people, commentators attacked the ALP and spread claims that voting Labor would lead to vast increases in refugee numbers which would mean fewer family visas, or suggesting that the Safe Schools program would mean boys could use girls’ toilets.

Liu, a Melbourne ALP activist and blogger on Chinese-Australian issues, tried to counter what he saw as a disinformation campaign but was hounded out and banned from many groups. 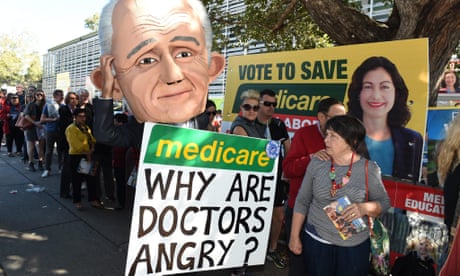 “It was almost like a religious cult,” he says. “If you did not believe in the holy dogma, you’d be harassed and abused.”

Liu took screenshots of many conversations. In one, a Glen Eira councillor, Kelvin Ho, seemed to suggest that legalising same-sex marriage would lead to approval of bestiality. Ho later apologised but claimed he had been mistranslated.

What Liu had uncovered was a volunteer-run social media campaign conducted entirely in Chinese, designed to hurt Labor.

The architect of that scheme was Gladys Liu, the Liberal party communities engagement committee chairwoman for Victoria.

She says the campaign was behind the upset result in Chisholm, in Melbourne’s east, where the Liberals bucked a nationwide trend and snatched the marginal seat from Labor.

The retirement of a well-regarded sitting member, Anna Burke, and the Country Fire Authority and Skyrail controversies may also have played a role.

But Gladys Liu points to results from voting booths in Box Hill, where more than 20% of voters are Chinese speakers, which registered a first-preference swing of 4.2% to the Liberal candidate, Julie Banks, and 5.6% away from Labor.

“In the booth results, we did very well in Box Hill and the upper end of the electorate, as well as neighbouring seats like Deakin and Kooyong with higher Chinese demographics,” Gladys Liu says.

In the 2011 census more than 15% of Chisholm residents were recorded as speaking a Chinese language at home and there has been significant Chinese migration since then. In the adjacent electorate of Deakin, covering Blackburn through to Croydon, the 2011 figure is 7.5%, while the electorate of Kooyong – Kew to Balwyn – sits at 9.3%.

Chinese people come to Australia because they want good things for the next generation, not to be destroyed

“If you ask how many Chinese people read mainstream news, the percentage is so, so low,” Gladys Liu says. “But the first thing they do in the morning is turn on the phone and go to WeChat straight away.”

She says the campaign was run by volunteers like herself and centred on three issues: the Safe Schools controversy, same-sex marriage and economic management.

“A lot of parents don’t agree with letting boys go into a girls’ toilet,” she says. “They strongly opposed the Safe Schools program. Cross-dressing and transgender – this is something they found difficult to accept. Chinese believe same-sex [marriage] is against normal practice.

“Chinese people come to Australia because they want good things for the next generation, not to be destroyed – they use the word destroyed – [by] same-sex, transgender, intergender. All this rubbish.”

Gladys Liu says refugees were also a key issue for Chinese voters. “If Labor is going to open the gate and let refugees in, that will affect people here and their lives here,” she says.

But she denies that there was an orchestrated disinformation campaign. “If Labor policies are good, they can dominate WeChat,” she says. “But Chinese don’t like their policies.”

She distances the party from Ho’s statements. “We cannot control any individual. [Ho] can only represent himself. He did not represent the party’s view.”

“There clearly was a campaign that ran through WeChat, appealing to people’s fears and spreading untruths specifically designed to turn the Chinese community against [Labor],” she says. “It was lowest-common-denominator politics. It played on their greatest fears.”

She saw posts claiming Labor would increase the refugee quota at the expense of Chinese migrants. “There was clearly no factual basis but it was very opportunistic,” she says.

The New South Wales Labor Senate candidate Paul Han says the campaign also ran in Chinese-heavy seats in Sydney. He criticised the tactics in a Chinese-language press release a week out from the election.

“It is definitely systematic, organised and pushed by a team of political activists,” he says. “It spreads so fast and took everyone by surprise. The purpose is very obvious. But it is a very dirty tactic.”

WeChat: want an app that lets you do everything at once?

Han says he saw pro-Liberal posters circulating a voting survey on WeChat immediately after posting anti-Labor claims – 80% of respondents said they would now not vote Labor.

The WeChat campaign has been a rare success for the Liberals in the nationwide battle for ethnic-minority votes. Labor ran effective ads on its Save Medicare campaign in several languages other than English. On Tuesday senior Liberal sources told SBS the party leadership had not focused on the multicultural vote.

Australia’s Chinese community were sympathetic to Labor during the migration waves of the 1980s and 90s, due in part to gratitude for Bob Hawke’s decision to let Chinese students stay after the Tiananmen Square massacre. But later migrants who come on investor visas are more receptive to business-oriented Liberal policies, according to Jieh-Yung Lo, the co-founder of Poliversity, a partisan organisation trying to increase the cultural diversity of the Labor party.