SHANE GEHA was introduced as a Developer and Planning Consultant … has he gone to the darkside of the profession?

And it would appear Racist referring to whinging Poms?

WHY is Geha espousing Sydney would be greater with more people … because there are several other developed nations with stagnant/falling populations have actually enjoyed stronger per capita GDP growth than Australia? 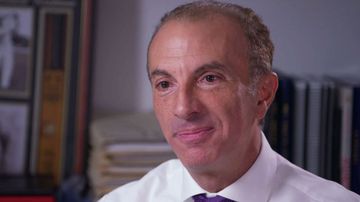 As founding Managing Director of EG’s Urban Planning business, Shane bears overall responsibility for all EG’s rezoning projects. Shane has extensive rezoning experience and brings a combination of practical know-how and value creation skills to projects he is involved in.

He was previously a director of a private company managing over AU$200 million in property development in NSW and the ACT.

Geha’s LinkedIn profile also tells us that he’s up to his neck in the ‘rezoning’ business:

His focus is working closely with clients on property uplift strategy and implementation and has worked on multiple rezoning projects including some of the largest land use changes in both size and value in Sydney and New South Wales.

Now that Geha’s vested interest has been exposed, it’s hardly surprising that he went out of his way to spin ‘Big Australia’ propaganda to 60 Minutes reporter Liam Bartlett:

Liam Bartlett: “Do you need a lot of people to have a good city”?

Shane Geha: “Yes. In my opinion, the really great cities of the world have to have at least 6,7,8 million people”.

Liam Bartlett: “So, the critical mass for Sydney you think is about double what it is now?”

Shane Geha: “It would not be terrible if Sydney was double 5 million”…

So how does Geha explain the fact that only one city ranked in the top 10 of the 2019 Mercer Quality of Living Index:

Has an urban population of greater than 3 million people?

We’ve got one of the luckiest countries in the world and one of the nicest cities (Sydney) by any measure. And we still can’t say “thank you”, this is a great place. And it can be a greater place with more people”.

“You know what, you can fund double the infrastructure if you had more people”.

CAAN:  How RACIST, is that?  We were the lucky country; Sydney was beautiful … until things like this …

Righto. So because Sydney is a great city, we’ve gotta wreck it by stuffing it full with 10 million people, thus driving traffic congestion up even further:

And forcing future Australians to live in high-rise dog boxes:

Heck, even Infrastructure Australia projects that Sydney’s liveability will unambiguously decline irrespective of how the city builds-out, with worsening traffic congestion, longer commute times, and reduced access to schools, jobs, hospitals and green space as Sydney expands to a projected 7.4 million people by 2046 (let alone to nearly 10 million by 2066):

Shane Geha: “Let’s look at the reverse. The reverse is have no immigration tomorrow, say.  What will happen is that we’ll have a stagnation in growth. We’ll have shrinking tax receipts… we will not be able to fund existing services. We’ll either have to borrow or tax more… I’m not sure that’s the way to go”?

Why is the option zero migration or turbo-charged migration? How about sustainable migration – you know, like we had before John Howard opened the floodgates in the early-2000s?

Shane Geha obviously believes in ponzi economics. He conveniently takes no account of the extra costs created from having more people (e.g. infrastructure, public services, liveability and environment). He also ignores the fact that these migrants will also grow old, thereby requiring an ever larger immigration intake.

Besides, several other developed nations with stagnant/falling populations have actually enjoyed stronger per capita GDP growth than Australia.

Liam Bartlett: “You seriously think that if we have high density in Sydney and Melbourne, everyone will have better quality of life”?

Shane Geha: “Let me give you the converse.  If we put people 50kms out, as we are doing at the moment in low density housing, it’s almost impossible to get the public transport to work to them”…

Liam Bartlett: “Shane, where do you live?”

Shane Geha: “I live in the Eastern Suburbs”

Liam Bartlett: “In a house”?

Liam Bartlett: “With a block”?

Shane Geha: “With a block”.

Shane Geha: “But I’ve lived in high density up until that point”.

So here we have another growth ponziteer talking his own book.

Let’s be brutally honest here. The empirical evidence unambiguously shows that Australia’s 15-year experiment with mass immigration has been a cataclysmic failure, as evidenced by worsening quality of life across all key metrics in our major cities, which is projected to continue under the Big Australia policy according to Infrastructure Australia.

For Shane Geha to then advocate doubling down in order to fix the problems caused by mass immigration is akin to claiming the cure to alcoholism is drinking more alcohol.

All of which reminds me of Upton Sinclair’s famous quote:

“It is difficult to get a man to understand something, when his salary depends on his not understanding it.”