View the Video:  “Housing development has outgrown infrastructure so much in one part of Sydney’s north-west that the State Government has suspended all planning proposals pending a council review.”

Does it seem that the Planning Minister is feigning concern?  He says:  this move is about “good planning”  …. this coming from the same Minister who met with 53 DEVELOPER GROUPS from January to September 2017 and not a single resident …

THE SOLUTION – SYDNEY – vote the LNP out and demand the ALP Feds enforce the Anti-Money Laundering Legislation for the Real Estate Sector!  That’l stop Visa Manipulation and slow down migration/population growth …

CAAN Photo:  Chinese developer JQZ “PRIME” Waterloo Road, Macquarie Park; promoted as a Precinct within itself.  This was formerly a premium commercial site within the business park in a bushland setting;  employing local residents. 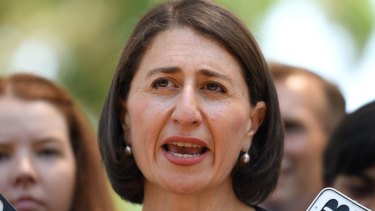 Photo: SMH: ‘Gobbledygook and doublespeak’:  How ‘Gladys’ gang’ is failing Sydney on planning

The NSW Liberal Government has resorted to propaganda in a bid to deflect voter anger about overdevelopment and declining liveability in the lead up to the state election.

Instead of being honest and upfront about the massive number of apartment developments planned for Sydney, the Government is instead spruiking “more parks and open space”. From The SMH:

When the government feels obliged to tell the world about a new batch of apartments it wants built, it tends to employ the ruse these days of talking about parks instead. It’s the parents’ trick of cloaking a trip to the dentist in the promise of future chocolate.

“More parks and open space,” declared the announcement about the redevelopment of Waterloo in inner Sydney.

Those interested in what was actually planned had to do their own sums to see the proposal in fact represented a scale of residential development never seen in Australia. And yet, somehow, Gladys’ gang described that as “more parks”

The dissembling is not an aberration. Rather there’s been an incoherence that long ago seeped into the government’s planning and development policies and which, with an election around the corner, has hardened into gobbledygook and doublespeak.

The fact remains that access to open space will shrink as long as Sydney’s population continues to balloon via mass immigration:

In fact, Infrastructure Australia’s recent projections for Sydney show that access to green space – let alone jobs, schools and hospitals – would reduce as Sydney’s population balloons to a projected 7.4 million people by 2046 (let along to around 9.6 million people by 2066, as projected by the ABS), irrespective of how Sydney builds out:

So, thanks to the federal government’s mass immigration ‘Big Australia’ policy, and the over-development that this entails, liveability in Sydney will be unambiguously eroded.

Rather than resorting to dishonest propaganda (Liberals) or faux concerns regarding over-development (Labor), both major parties need to meet in the middle, adopt a bi-partisan stance, and publicly demand that the federal government dramatically slow the immigration intake.

Because building ever more concrete box apartments for ever more migrants is the hallmark of brain dead policy and a guaranteed recipe for lower living standards.