-there are some 2.2 MILLION VISA HOLDERS currently in Australia

-many of whom will gain “permanent residency” Visas  …

*MB has previously lambasted the immigration ‘bait-and-switch’ deployed by former Prime Minister John Howard whereby he slammed the door shut on the relatively small number of refugees arriving into Australia by boat all the while stealthily shoving open the door to economic migrants arriving here by plane. 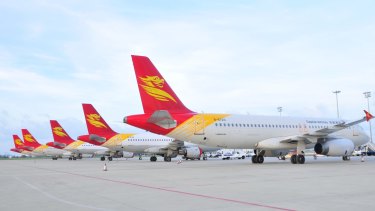 The ultimate result was a massive lift in Australia’s net migration intake, which surged from the mid-2000s and pushed population growth to roughly twice long-run norms. Moreover, the official projections are for this high intake to persist for the next half century (see next chart).

Much of this immigration has flooded into the two major cities – Sydney and Melbourne – whose populations have ballooned and are projected to continue doing so:

*It is the above massive increase in population that is the key reason why many of us living in the major cities are stuck in traffic, cannot get a seat on the train, are experiencing crowded hospitals and schools, and/or cannot afford a home.

In fact, this is the precise outcome projected by Infrastructure Australia as Sydney’s and Melbourne’s populations balloon, irrespective of how these cities build-out:

*Therefore, the net result of this “Big Australia” policy is that living standards are being eroded as the capacity of the economy and infrastructure to absorb all of the extra people is overwhelmed, and the country’s natural resources base is diluted among more people.

*John Howard never explicitly mentioned that he was in favour of high immigration because he knew the electorate would be against it.

*Instead, he scapegoated refugees to give the impression that he was stemming the migrant inflow while proceeding in secret with his ‘Big Australia’ plan.

*Fast forward 15-plus years and we are witnessing the immigration ‘bait-and-switch’ all over again, with our federal politicians at war over Australia’s humanitarian intake and offshore detention, while totally ignoring the flood of migrants arriving every year by plane.

Yes, Australia’s offshore detention policy is unambiguously cruel, an utter waste of precious taxpayer money, and should be closed-down.

*The ‘skilled’ program, by contrast, accounted for 111,000 places in 2017-18, most of which revolves around stealing workers from developing nations, thereby stifling their economic development.

*As we know, many ‘skilled’ migrants are also working in jobs well below their reported level of skill. There is also widespread visa rorting and exploitation going on.

Forgotten in all of this are the Australian people, who overwhelming want lower immigration, as revealed by the majority of recent opinion polls:

Australia desperately needs a frank and honest national conversation about population policy, which focuses on whether or not large-scale immigration is benefiting the living standards of the incumbent population.

What we don’t need is the dishonest ‘smoke and mirrors’ approach employed by our Parliament, which deliberately conflates (combines) the immigration intake with refugees, privatises the gains from mass immigration for big business and the construction union, and socialises the costs on everyone else.