In his first post, Mr Morrison wrote in Mandarin: “I hope to establish closer channels of communication with Chinese Australians through this WeChat account to present my work and national policies.” 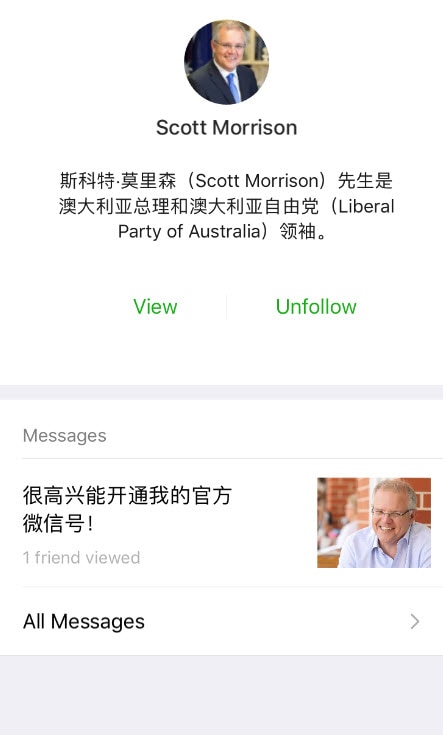 Security experts warn Beijing could spread propaganda in the lead-up to the federal election through popular social messaging service WeChat, which is facing less government scrutiny than US tech giants such as Facebook and Twitter.

While security analysts are divided about how serious a threat the Chinese Communist Party will pose come May, they point out WeChat is subject to strict controls from Beijing.

*Governments in Europe and North America have argued social media platforms must tackle the spread of fake news aimed at disrupting election campaigns, such as the Kremlin’s efforts to undermine the 2016 US presidential election.

*”What’s particularly concerning about WeChat is that it is subject to Chinese censorship and control,” ASPI senior cybersecurity analyst Tom Uren said. “It’s not just censorship – sometimes they promote particular issues so it’s a way of controlling public debate.”

“It’s worth opening a discussion with WeChat about how they run their platform in Australia and what they actually do. In an ideal world the government would actually get transparency on how that platform runs in Australia.”

*The federal government, via its Australian Electoral Commission, is consulting with Facebook, Google and Twitter ahead of election day to nut out strategies against disinformation. But the commission confirmed they have not spoken with Tencent, WeChat’s father company.

Using complex algorithms, WeChat – one of the few all-in-one Chinese social media apps allowed through the country’s strict firewall – blocks keywords and images that it deems profane or politically sensitive.

*Research released last year found official Australia-focused WeChat news accounts published next to no information on Chinese politics or foreign relations, and when they did the material toed the Chinese government line.

On Monday, Huawei founder Ren Zhengfei said the West would be “foolish” to continue moving away from the Chinese-owned phone company, in his first state television appearance following months of international Huawei controversy.

On Tuesday, the United States told the Canadian government they would proceed with a request to extradite Ms Wanzhou.

*Cybersecurity experts fear WeChat could be used to encourage the Chinese diaspora to favour one party over another – as it was used during the 2017 Bennelong byelection.

But experts are split on whether China would put resources into influencing the upcoming Australian federal election.

“One problem with theories that Beijing might interfere with the election is trying to work out who they would like to win,” Lowy Institute senior fellow Richard McGregor said. “It’s not clear to me that they have a hard preference, in which case any notions of interference are pointless to begin with.”

Rory Medcalf, head of the Australian National University’s National Security College, said that while China has reason to influence Australian policy, they would likely find it difficult given recent legislative changes that aim to limit foreign electoral interference.

“China has reason to want to influence Australian policy,” he said. “There is a desire in Beijing to reduce Australia’s support for the US alliance and to neutralise Australia as a country that supports a rules-based order in Asia, on issues like the South China Sea or human rights.

“Recent legislative changes will go a long way to reduce the risks of direct influence on our elections,” Professor Medcalf continued. “The bigger risk is the use of propaganda, including online, to try to influence what voters think.”

Greg Austin, professor of cyber security, strategy and diplomacy at the University of New South Wales’ Canberra campus agreed that China pushed its own propaganda in Australia, but said it had little motive to target the federal election.

“China does want to influence Australian policy but it’s not having much success. And it doesn’t seem to have any particular favourite between the Labor Party and the Coalition.”

“It is essential that foreign donors do not influence our elections and that organisations in Australia comply with the law. The Morrison government will ensure compliance with this important legislation, both in practice and in spirit, as the Australian public expect.”

Max is a journalist at The Sydney Morning Herald and The Age.