GEE!  Where would they have come from?

The likes of deve-lopers, mining, banking and finance, pharmaceuticals, The Big End of Town … and of course the new huge influx …

LET’s ensure they have done their “bad money”! Prime Minister Scott Morrison has boasted of an influx of donations to the Liberal Party as Bill Shorten inches closer to power, and says he’s unafraid to run a negative election campaign against Labor’s tax changes.

“I’m going to be pretty honest (?!! ) with people. I am going to talk to people pretty bluntly about what is coming and I don’t want them to wake up a year later and go ‘oh, oh I really didn’t think that was going to happen’. If you want to vote Labor, understand what it will mean.”

Mr Morrison also used an interview with The Sydney Morning Herald and The Age to warn that a recession would devastate the economy, declaring Australia’s 27-year-long run of growth “our nation’s greatest achievement”.

READ more if you can bear it:

Copied here below are some of the comments we believe that best represent a great analysis of this awful period in Australia’s history!

Scott Morrison says he is not afraid to run a negative campaign against Bill Shorten and Labor.

Isn’t that what the Abbott/Turnbull/Morrison Liberal Party has done since coming to power because they have nothing else to offer only a trail of failed policies? Scott Morrison is left with this Government’s mess so his lying scare campaign is a cheap attempt to shift the blame and focus onto the Labor Party Opposition and away from his hopelessly divided Liberal Party Government.

The party that benefitted from a record economic run and ended up mismanaging the economy into an avoidable downturn is now about to dirty and rogue on the opposition. The public now having hundreds of millions of taxpayer funder ads party political ads thrown us. A pox on Morrison and his crew. It will be an excruciating wait for the election.

It’s hard to understand why Morrison wants to win the election. He has no policies to promote, and his party has done a lot of damage to modern Australia.

That influx of donations includes millions of taxpayer dollars that is not being used to run the country but to spread propaganda for the Scott Morrison Liberal Party Government for the upcoming election.

Mr Morrison also used an interview with The Sydney Morning Herald and The Age to warn that a recession would devastate the economy, declaring Australia’s 27-year-long run of growth “our nation’s greatest achievement”. “I’m not going to sugar coat the risk of Bill Shorten and Labor to the economy – but I’m not going to over-claim it,”

But a gaggle of 19 academic economists from 12 universities across six states. Among them are macroeconomists, economic modellers, former Treasury and Reserve Bank economists, and a former member of the Reserve Bank board, have forecast a stagnant economy for the next year. The forecast:
” The Australian economy will remain healthy for long enough to enable the government to claim it as a strength in the lead-up to the May election, but the first Conversation Economic Survey points to a fairly flat outlook beyond that, with a 25% chance of a recession in the next two years.”
https://theconversation.com/no-surplus-no-share-market-growth-no-lift-in-wage-growth-economic-survey-points-to-bleaker-times-post-election-110315

So even with the outside chance that Morrison will be Prime Minister after May 2019, there is the same risk to the economy that he is SHOUTING and SCARING us that could happen under the Shorten Labor government.

I think we can assume that the “influx of donations” flowing into the LNP would be from those sectors of society that are currently riding the gravy train of inequitable policy settings that are rewarding rent seeking behaviours, retarding wage growth and reducing the taxation commitments of those most able to pay.

According to ScoMo “… I don’t want them to wake up a year later and go ‘oh, oh I really didn’t think that was going to happen”.

This from a Treasurer who, year after year, couldn’t get the May Budget to look anything like the December MYEFO which still had the ink wet, yet he can predict the outcome over something that he will have zero control over.

Well he may be right there but as sure as night follows day he is over-egging things with his doomed outlook.

But that makes sense. Combining sugar-coating and over-egging will produce a nice pavlova which all good Aussies will know is “a meringue dessert with a crisp crust and soft, light inside” (Wikipedia). All fluff and no substance.

Remember MediSCARE, labor are not Snow White on the blatant lies department

It wasn’t a lie. The libs quietly closed an office just before the last election which was looking at privatising Medicare payments.

Morrison the Flim Flam man … as deep as a puddle. If the electorate get sucked in by this latest round of nasty fear tactics there is no hope for this country. We have reached the tipping point, vote this mob back in there will be no saving the Murray Darling or anything worth leaving for the future.

So the LNP is going to sling some mud and go dirty about what the ALP might do, or could do, or may happen.

But let’s not forget the ALP have a bit of mud they can sling back. Not about maybes but about what the LNP actually did.

Round one the banking royal commissions damming report, a commission resisted 26 times, resistance led by the ten treasurer Morrison.

Round two, the waster royal commission that highlights very bad management on the LNP’s watch and raises questions about the Nationals priorities and competence.

Round three, the productivity commission report into superannuation and the LNP’s campaign against industry super funds and championing retail funds to the disadvantage of savers.

Round four, energy and the environment. Years of doing little and resisting change from the LNP, expert reports commissioned and ignored, and plan after plan abandoned, to be replaced by proposed sweet heart deals with coal power stations run by an ex-Nationals candidate for parliament.

Round five, equality, the resistance and nasty campaign against SSM, MPs failing to follow their electorates wishes, then the hidden Ruddich report, and reneging on the promise to protect all students from discrimination.

Round six, the child abuse royal commission and slow response to funding compensation for victims, then the massive donations to the Catholic schools to over fund them relative to secular state schools.

Oh yes labor have lots of ammunition if Morrison wants to play dirty,

The LNP is just running their standard campaign of lies, lies, and more lies. Next comes the money tree of vote buying, as they forget the scare they just gave us about spending into recession.

It doesn’t matter how much money Mr Morrison gets in donations, it is not going to save this government. Enough is enough.. goodbye and good riddance..!

He we go again. Fear mongering, lies, exaggerations, pork barreling followed by more fear mongering, lies, exaggerations and pork barreling. Let’s hope that the majority of the Australian electorate are wise to this mode of operation. We cannot have a regressive form of Government with fossilized ideals in power. I wonder what world these misguided donors think their grand children will inherit if retro-neocon Governments are elected in Australia and elsewhere? 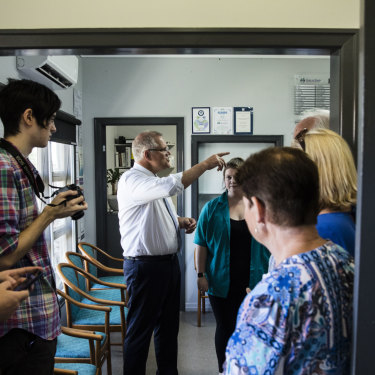