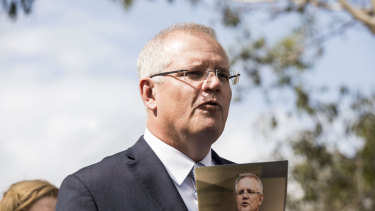 PM Scummo begins his re-election pitch today with a speech based upon fantasy:

Labor said we would fail, but we nailed it – 1.1 million jobs within five years and we are now past 1.2 million jobs.

Today, I am making a new jobs pledge for our government, to see 1.25 million jobs created over the next five years.

…[with] continued good management, our debt can be eliminated within the decade.

At this next election, only half of those of voting age will have experienced a recession during their working lives.

So it is important to remind all of us that our economy cannot be taken for granted.

Over five years, we have repaired Australia’s fiscal position. We did this without slowing the economy or harming jobs growth.

You’ll be deciding the economy you and your families – your children and grandchildren – will live in for the next decade. And the consequences will be real.

Labor and Mr Shorten are offering you a weaker economy to live in, held back by higher taxes.

The jobs pledge is a nothing benchmark. As we pointed out during the Abbott years, the one million pledge is weak jobs growth amounting to barely enough to absorb population growth:

Job growth since September 2013 has averaged 18,200 a month, which is marginally above the 17,230 jobs per month created in the decade to September 2013, which also included the fallout from the Global Financial Crisis.

Australia’s population is also growing quickly, which (other things equal) means that employment must grow faster to absorb the additional workers.

At current rates there will be another 800k foreign workers in Australia over the next five years leaving a paltry 200k to split between the existing population.

As we have observed for the past five years, this level of influx of foreign workers destroys industrial relations rules. It is no wonder then that the underemployment rates was virtually unchanged from November 2013 to November 2018 – i.e. 13.8% versus 13.4% – nowhere near low enough to generate wages growth.

The second pledge of paying down net debt is preposterous, especially so when coupled with employment commitment. Over the next five years China will almost certainly slow and commodity prices fall, as well as the world experience a shock of some kind necessitating greater fiscal spending and deficits. This is underlined by the fact that in the past year government created 304,500 jobs, whereas private sector employment contracted by 92,700 jobs. There are no private sector drivers for jobs growth with mining carrying over-capacity and the much vaunted services economy paralysed by deleveraging and the RBA out of bullets.

As that process intensifies and the private sector retrenches, if government runs larger surpluses while Australia runs external deficits then the basic calculus of GDP guarantees that growth, jobs and budget revenue will fall. Yet somehow Scummo is pledging to find an additional 35bn per annum to pay off the $350bn in net debt.

It is also a straight lie that the Coalition has not raised taxes since 2013, they have marched higher, via Gerard Minack:

And they will continue to do so thanks to bracket creep and a Coalition schedule of tax cuts that heavily favour the wealthy.

The one pledge that we can expect the Scummo Government to deliver on in spades is a boom in economic lies.