-despite the price falls

With an election a few months away where negative gearing is at play, and the banks are still being very draconian on providing loans to the market.

HOWEVER, from Juwai prediction that Chinese buyers will be attracted by the price fall, and that their participation in the Australian property market especially for “new homes” will be maintained!

It would seem with tightening of bank credit that will lessen opportunities here for Australian First Home Buyers!!

Note nor has the Marrickville project been without community objection!

In a gloomy outlook for the country’s largest real estate developers, UBS says Mirvac, Lendlease and Stockland face a higher risk of settlements falling over because of their exposure to projects sold to buyers at the 2017 peak of the property cycle.

“We see Mirvac as most at risk followed by Lendlease and Stockland,” analysts Grant McCasker and James Druce said.

Australia is in the midst of a property slump with apartment prices falling 7 per cent in Sydney and 2 per cent in Melbourne.

Lending is down 22 per cent from its peak as the big four banks tighten the screws on investors, raising standard variable interest rates and ramping up scrutiny of borrower’s applications.

Apartment sales make up a significant chunk of earnings for Mirvac, in particular, over the next three financial years.

In 2020, nearly a third of the group’s earnings will come from settlements in Sydney and Melbourne.

The most at risk projects are in Sydney’s Marrickville and Olympic Park which “appear already out of the money” because Sydney’s apartment price index has fallen 5 per cent since launch, the analysts said.

St Leonards could also become an issue were prices to fall a further 5 to 10 per cent.

“We are less concerned about Lendlease’s settlement risk given the price growth since the 2015-16 launch dates,” Mr McCasker and Mr Druce said.

Another major developer, Stockland, has minimal exposure to the apartment market but is banking on substantial earnings from land sales for new homes.

The number of buyers cancelling contracts on land purchases is presently low, but UBS warns that tightening credit, price falls, incentives and lower deposits will increase the number of struggling buyers.

There has been a documented rise in speculative land buyers trying to offload their purchase contracts on Gumtree and other sites, which adds to the risks.

Mirvac, Stockland and Lendlease declined to comment on the report, saying they are in the ”blackout” phase before the release of their interim reports for the December half, due in the coming weeks.

Property experts believe there is more pain to come for the sector.

“This downturn still has some legs to run yet,” he said Tuesday.

“Sydney and Melbourne remain heavily overvalued despite the price falls that have happened, there is an election just a few months away where negative gearing is at play, and the banks are still being very draconian on providing loans to the market.”

“We think there will be more price declines,” he said. 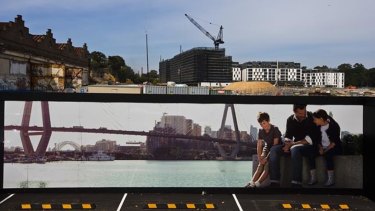 Property Editor at The Age and BusinessDay journalist for Fairfax’s theage.com.au, smh.com.au, watoday.com.au and brisbanetimes.com.au.