–her office was broken into in December 2017; then a detailed warning letter followed of an official campaign of intimidation; her home was broken into with laptops, phones and encrypted memory stick missing!

More break-ins … she then gave a testimony to Australia’s Parliament by video link about her research into Chinese Communist Party activities in Antarctica!

ISN’t it time the safety and security of Australians became the Government’s Number One Priority?

After a quarter-century of researching China, Anne-Marie Brady is a veteran of Chinese government spying and harassment.

“I was prepared for pressure in China,” says the 52-year-old New Zealander, a well-regarded professor of political science at the University of Canterbury in Christchurch.

“But I always felt safe in New Zealand. So that changed.”

Last week she wrote to Prime Minister Jacinda Ardern seeking police protection. It was her first direct appeal to Ardern, but her third in a series of pleas to escalating levels of officialdom.

First came the pressure on her university. Chinese officials demanded that her immediate superior stop her research. It might have worked – the NZ Ministry of Foreign Affairs as well as the mayor of Christchurch backed them up in an effort to appease Beijing.

They failed when the university vice-chancellor intervened on behalf of academic freedom. But it was just the beginning.

Next, her office was broken into in December 2017. As far as she could tell, nothing was taken. “I think it was meant to scare me, to show me people could come into my office.” If so, it worked: “I felt this great dread,” after the intrusion. “I reported it to security and there was no follow-up.”

If she had any doubt that she’d been targeted, she got a detailed warning letter from a concerned friend in the Chinese community to let her know that an official campaign of intimidation against her – and others – was under way.

Saving Yang Hengjun: we must not tolerate China’s hostage diplomacy

Brady’s home was next. While she was on the phone to the NZ Secret Intelligence Service negotiating to give them the letter, her husband called to say that someone had broken in. “Cash, pearls, jewellery, other electronics were ignored,” Brady tells me.

The only things missing were laptops, phones and an encrypted memory stick from her last trip to China. Other memory sticks were left behind.

“It was very telling.”  She immediately reported the break-in to the intelligence service and the police. Brady went to her office the next morning to discover that it had been broken into. Again. It was February 15 last year. Brady was scheduled to give testimony to Australia’s Parliament that afternoon.

She gave evidence by video link to two committees keen to know about, among other things, her groundbreaking research into the Chinese Communist Party’s activities in Antarctica in the course of producing her book China as a Polar Great Power.

This is a vital interest for Australia, which has sovereignty over 42 per cent of the continent, as well as a vital area for NZ. And it turns out to be an area of very lively interest to China’s military too, as Brady’s research had unearthed.

Her work uncovered, for instance, that the Chinese People’s Liberation Army had built three military facilities on Australian Antarctic territory.

So when Australian Liberal MP Julian Leeser asked Brady whether she’d encountered any personal difficulties from Beijing over her work, she replied “yes”, and summarised the various incidents.

*The Chinese government was deeply displeased that Brady had spoken out. “Soon after my testimony to the Australian parliamentary committees, some of my colleagues in Chinese universities were visited by the Ministry of State Security.

Yet the NZ police didn’t take the matter seriously. And the incidents continue.

*In November, Brady’s car was tampered with. The NZ police treated the matter with familiar indifference and told the mechanic not to speak to the media.

Caught in the crossfire? The mysterious detention of Yang Hengjun

*When Brady and her family returned home this month after a Christmas holiday, their phone rang at 3am. The caller was silent. The number is unlisted.

It’s not only her Antarctic research that Beijing wants to stop. She also unearthed the fact that a member of the NZ Parliament spent 15 years working for Chinese military intelligence but never disclosed it.

But the harassment in her own country seems to have been in angry response to her 2017 report in NZ, titled Magic Weapons: China’s Political Influence Activities Under Xi Jinping.

*The title is a reference to the fact that President Xi named three “magic weapons” of Chinese Communist Party power – the People’s Liberation Army, the party’s program to strengthen and build itself, and the party’s United Front Work Department that covertly spreads party influence through the overseas Chinese diaspora and elements of Chinese culture and business.

*This is the same Chinese Communist Party agenda that the Turnbull government sought to address with its foreign influence laws, which are just now about to take full effect.

*The power of Brady’s work is that she meticulously reads original Chinese documents in the original Mandarin. It is her own “secret weapon”.

Australia’s John Garnaut, a Mandarin-speaking former Beijing correspondent for this newspaper, says: “Professor Brady is a first-rate scholar who has led the global conversation and almost single-handedly woken up NZ.”

*The chair of the Australian Parliament’s security and intelligence committee, Andrew Hastie, says that after listening to her evidence and other conversations, “it appears that she’s a target of interest for the Chinese Communist Party or apparatchiks of the Chinese state as a way of silencing her and intimidating her.”

*Unfortunately for Brady, her country’s government is more interested in appeasing China’s rulers than protecting her, or protecting NZ’s democratic freedoms.

*”It’s very clear,” says Brady, “that my country’s government wants this story to go away. The Chinese Ministry of State Security operates in our societies unhindered and our governments just watch. It’s happening in Australia, too.”

John Garnaut, who was commissioned by Malcolm Turnbull to write the classified report that informed his government’s foreign interference laws, confirms: “It would be naive and also reckless to assume that similar activities are not happening here.”

In the meantime Brady and her family are left to defend themselves. “It’s an uneven contest,” she says. “we are just an ordinary family facing down the Chinese Communist Party.” She is continuing her work regardless: “I haven’t changed. China’s changed.” 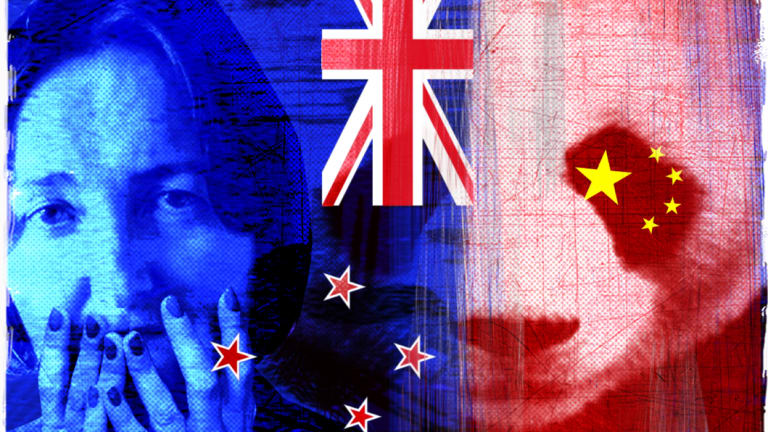 Peter Hartcher is Political Editor and International Editor of The Sydney Morning Herald.