EDITORIAL: Something stinks in the Coalition and it’s not just dead fish

The sight of close to a million dead fish in one of Australia’s most important waterways may herald the end for the Morrison Government.

For this is hardly the first time this Coalition Government, under its various iterations, has spat in the face of Australia’s precious resources.

For now, however, let’s look at the Murray-Darling disaster and how we got here.

While then Deputy Prime Minister and Minister for Agriculture and Water Barnaby Joyce was busy building up his “private” media brand enough to rival the Kardashians, under his watch, the management of the Murray-Darling Basin was steadily careering out of control.

The Draft Report revealed the Plan’s absence of transparency, lack of oversight and direction, and that it was lagging well behind schedule and wasting taxpayer dollars:

An immediate improvement is nevertheless required in two important elements of the Plan.

– The development and accreditation of Water Resource Plans is behind schedule…

…There are major shortcomings in the current institutional and governance arrangements and these pose a significant risk to successful implementation. Now is the time for Basin governments to do some heavy lifting and provide strategic direction…

This is an opportunity to make important “stitch in time” changes to ensure an effective Plan. Failure will be costly for the environment and tax-payers and undermine confidence that the significant investment in the Basin Plan has been worthwhile.

It doesn’t appear as though any of this advice was heeded in the months leading up to the fish kill apocalypse.

From Aug 18 > ‘Barnaby Joyce tilted the Murray-Darling Basin Authority towards irrigation interests over the environment when he was agriculture minister, the former director of the National Farmers’ Federation has claimed’ #auspol https://www.theguardian.com/australia-news/2018/aug/17/barnaby-joyce-accused-of-tilting-murray-darling-authority-towards-irrigators …

37 people are talking about this

In June 2017, IA published an investigative report from Mark Zanker, ‘The Murray-Darling Basin: Water, markets and money’, which indicated an exorbitant overpayment for water in Tandou and Menindee. It prompted a sharp dressing down and request from the Department of Agriculture that we remove the article on the grounds it was ‘inaccurate’. Since the Department did not provide any information about any of these purported inaccuracies, even after repeated requests, we did not take down Mark’s meticulously researched article.

The price of the sale was not mentioned in the media release, but the ABC reported that Tandou stated that it would receive $78 million from the transaction. That would be used by Tandou (Webster Limited) to retire debt.

The ABC interviewedTom Rooney, one of the founding directors of the water broking firm Waterfind Australia, based in Adelaide. He was asked for his assessment of the price paid and whether the deal was a good one for Webster Ltd. Rooney described the deal as a “fantastic deal” for Webster. The reason for that was that the purchase price paid by the Commonwealth was, roughly, $3,500 per megalitre, whereas the running average price of water in the Lower Darling traded on the water market over recent years was $140 per megalitre.

If the Department of Agriculture paid 2500% above the average price for water, there appears to be one clear loser — the Australian taxpayer.

The following month, in July 2017, an ABC Four Corners  program provided further evidence of the extent of Government mismanagement, at both a Federal and NSW State Level, revealing:

‘… just two irrigators, Webster and, prominent cottonfarmer Peter Harris, own about 70 per cent of all licenced water in Barwon-Darling.’

Four Corners also revealed that according to the head of the Commonwealth Environmental Water Office at that time, David Papps:

‘… the NSW Government had “legally embodied” increased access to water and “unsustainable irrigation practices”, describing its attitude to the Basin Plan as “openly hostile”.’

An excellent op-ed in The Age by Helen Vivian (March 2018) also supported Mark Zanker’s observations and highlighted the importance of this vital arterial waterway:

It’s like a giant neon emergency signal flashing across the four most populous states in the country. Depleted, despoiled, often poisonous and since 2001 frequently dry, the Darling River is an emblem of poor government, mismanagement, greed and anti-democratic activity.

The first of these was the purchase of $34 million of supplementary water rights, described locally as “empty buckets of water”, sold to the Federal Government during the millennium drought in 2008 by Tandou Station, 100 kilometres south-east of Broken Hill and just south of the Menindee Lakes. A further water sale to the Federal Government was made last year by the same station, $78 million for their entire 21,900-megalitre water right and for business readjustment.

As was reported last month, that deal – personally negotiated by Barnaby Joyce – was at more than twice the market price for water.

Scratching around for something to point his incompetent fingers at after the mass fish deaths disaster, Minister for Agriculture and Water Resources, and Minister Assisting the Prime Minister for Drought Preparation and Response, David Littleproud, blamed it on the drought, calling it a “natural event”.

The Federal Minister for Agriculture and Water Resources David Littleproud joins AM to discuss the recent fish kills and the ongoing Australian drought.

‘Put simply, ecological evidence shows the Barwon-Darling River is not meant to dry out to disconnected pools — even during drought conditions. Water diversions have disrupted the natural balance of wetlands that support massive ecosystems.’

The obvious lack of governance and accountability prompted even one of the Nationals’ political collaborators, Liberal Party Wagga branch president Colin Taggart, to respond:

“The Nats are plagued by scandal, vested with bullies and riddled with incompetence … The one thing they were supposed to be good at were[sic] looking after farmers and they have failed at that. Look at the management of the Murray-Darling.”

Indeed. Back to you then, Littleproud and Joyce.

Prime Minister Morrison tried to argue that despite the “devasting ecological event”, the Government had been “operating in accordance with scientific evidence” provided back in 2012 — except it has not.

A leaked 2012 memo from Fisheries NSW belies this claim:

‘There appears to have been no consideration of any scientific information on the impact of extraction or changes to the environment that have been detailed in the last decade.’ 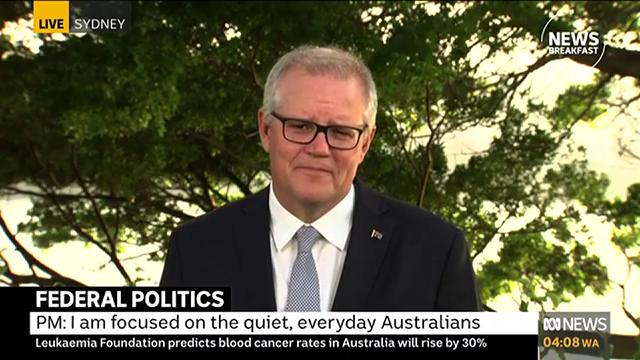 Actually, the plan IGNORED the advice from scientists, who warned that this would happen.
This scientific advice and the warning has been released/leaked. We have all seen it. So Scott lied when he said the plan was operating in accordance with scientific advice. pic.twitter.com/BSBCoMdPJG 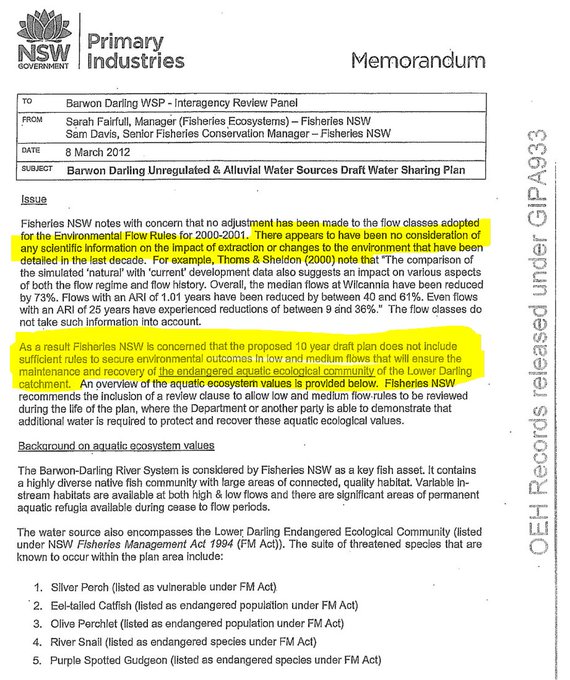 60 people are talking about this

But all of this, of course, does not mean that anything will change anytime soon and, if past “achievements” are anything to go by, the gross mismanagement of the Murray-Darling Basin, upon which so many livelihoods depend, will continue.

Perhaps the most damning part of this whole sordid, stinking mess is best summed up by one little detail about the chief beneficiary of Coalition Government water policy, Webster Limited:

‘Webster, a Tasmanian company, is also one of Australia’s biggest water traders. Its shareholders include Australian Food and Fibre, which is controlled by the Robinson family, a major donor to the National Party.’

This editorial was originally published as part of the Independent Australia weekly newsletter. These editorials are usually only available to subscribers and may be read online in the IA members only area.

It takes less a minute to subscribe to IA and costs as little as $5 a month, or $50 a year — a very small sum for quality journalism and many great extras.