CAAN:  THE EDWIN DAVEY site was purchased in 2010 by Edward Doueihi, Director, Ceerose. The company held an architectural competition for the site and shortlisted three designs.

Community groups were invited to be involved with the design competition of the site, and were consulted on the planning of the site development. The company indicated they met with numerous members of two Pyrmont community groups.

One cannot but help but wonder why a more sympathetic design could not have been incorporated to compliment the brick classical facade of the flour mill rather than the current box trend that is repeated all over Sydney?

Why not designs like that incorporated to compliment the heritage in Oxford, U.K.? 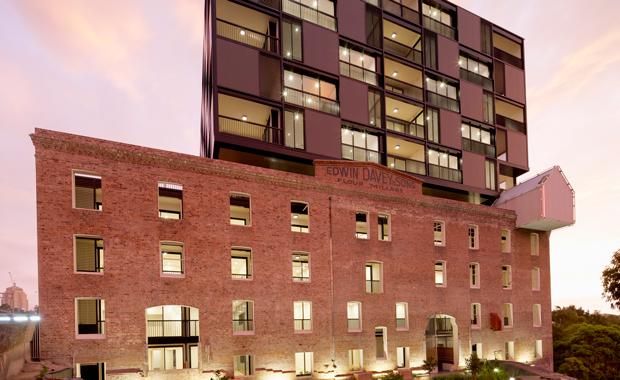 One of Sydney’s most anticipated adaptive-reuse projects is complete.

Millions of Anzac Bridge commuters have watched the painstaking progress of Harbour Mill at Pyrmont as it intricately weaves modern apartments within the remnant facade of the Edwin Davey Flour Mill, which was built in 1896.

Reinvigorating the local landmark on the edge of the Western Distributor – one of Sydney’s busiest expressways – has been a three-year labour of love for the developer, Edward Doueihi, the founder of Ceerose.

Preserving the mill’s proud history was a priority because of a family connection. His father ran a bakery in Cowper Street, Granville, and he’d often take the young Eddie to the mill to collect supplies.

“I’ve been emotionally attached to the mill since my childhood so I’ve harboured a dream to build something on that site which reflects my fond memories.”

For many years it seemed those memories would never be rekindled. A fire in 1996 gutted the mill, leaving a crumbling corner of the façade that attracted the attention of graffiti artists – and the National Trust.

The then owner wanted to clear the site, and he lodged plans to erect a multi-level commercial building. A successful campaign was mounted to have the façade heritage listed, and the City of Sydney Council subsequently refused his Development Application.

“That was the opportunity I was looking for,” Mr Doueihi said. “I bought the site and invited some of this city’s finest architects to take part in a design competition. An integral aspect of the brief was that any new structure had to be integrated with the remnant façade.”

Acclaimed international firm Grimshaw Architects won the competition with an unique solution that pays tribute to the mill’s heritage whilst being underpinned by principles of humane, enduring and sustainable design.