WHAT are the Australian laws on “reselling” goods from retail outlets?  It would appear they need to be enforced!

WITH the Daigou market in Australia estimated at $850M and 60,000 -70,000 Chinese living in Australia undertaking such trading practices across a range of goods, and in Real Estate!

The Daigou Association may assist in the resolution of issues in the supermarket, but how can it eliminate the theft and/or abuse of purchase unless the stores police this themselves by taking such goods off the shelf and establishing an in-store register with limits on purchase and CCTV?

IS it any wonder there has been such a scramble and chaos with Daigou making $100,00 or more annual income?

ARE these the sort of immigrants or “Permanent Residents” that Australia wants who appear to be on the take rather than contributing to our Society?

ARE the Daigou paying their share of Tax?  Will this ensure they pay tax like the Australian PAYE Taxpayer?  They mail out in bulk to save costs …

AS AN ASIDE HOW MANY OF THE DAIGOU HAVE BEEN ACTING AS THE ONSHORE PROXY IN THE AUSTRALIAN REAL ESTATE MARKET?

DESPITE the Daigou Association Launch in Australia … February 2018 … the Baby Formula chaos continues in the Supermarkets! 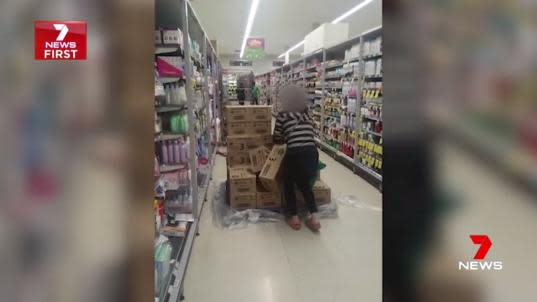 Australia’s giant brigade of Chinese ‘daigou’ shoppers is about to table a circuit-breaker on baby formula, hoping to put an end to supermarket scuffles and empty shelves.

With some Chinese immigrants and students reportedly making up to $100,000 a year by shipping Australian formula back home, filming frenzied baby formula chaos is now commonplace across social media as disgruntled shoppers battle it out for the prized commodity.

From a Christmas Eve swarm on a Coles site in Sydney to a round-robin raid on Woolworths in Brisbane, Aussie shoppers have worked to expose China’s tin-can army who appear to breach store limits over and over.

Yet experts believe there are alternatives to what has become one of the most controversial issues across the nation.

“The daigou we talk to – none of them like going into Coles and Woolies and becoming vilified through people filming them,” Dr Mathew McDougall, from the Australia China Daigou Association, said.

“So I think if we provide an alternative path to doing that – there’d be a lot of people opt-in.”

A new plan, which will go to supermarket chiefs next month, would see a dedicated register for Australia’s 40,000 daigou which would allow them to place unlimited orders online.

In theory it would give manufacturers firm forecasts on demand and would allow supermarkets to keep their cut, preventing scuffles in the aisles and breaching of the two-tin limit.

The move looks to follow suit with vitamin makers who have been operating a similar procedure for years.

“When you look at Swisse and Blackmores they’re much more organised and, in fact, Blackmores runs a daigou program,” Dr McDougall said.

Consumer behaviour analyst Barry Urquhart said the current “mess” did not need to be seen by the Australian consumer.