Another impact has been on Our Australian Society with high immigration and Visa Manipulation many Young Australians like the Chinese struggle with unaffordable housing, and spiralling living costs, and are delaying marriage, having a family, and home ownership as they are subject to the lowest wages growth and insecure work!

IS THE OPAL TOWER CRACK-UP A GODSEND?  LET’s HOPE SO!

By Alexandra Stevenson and Cao Li

For Hu Peiliang, Jurong was a city of cranes, concrete and opportunity. He was so sure it was on the cusp of a boom that last year he moved his family there.

On an overcast day last month, Hu, a 31-year-old real estate agent, pointed to one new building after another as evidence.

One development straddling several blocks called Yudong International will include 120 buildings when completed.

But who will buy all those apartments? Hu paused before answering. “I was wondering that myself,” he said. Since July, he has sold only a handful.

Unwanted apartments are weighing on China’s economy — and, by extension, dragging down growth around the world.

Property sales are dropping. Apartments are going unsold. Developers who bet big on continued good times are now staggering under billions of dollars of debt.

“The prospects of the property market are grim,” Xiang Songzuo, a senior economist at Renmin University, said during a lecture at Renmin Business School this month.

“The property market is the biggest grey rhino,” he said, referring to a term the government has used to describe visibly big problems in the Chinese economy that are disregarded until they start gaining momentum.

China is grappling with an economic slowdown brought on by efforts to curb debt and worsened by the trade fight with the United States.

But any solution will have to contend with the country’s property problems. More than 1 in 5 apartments in Chinese cities — roughly 65 million — sit unoccupied, estimates Gan Li, a professor at Southwestern University of Finance and Economics in Chengdu.

“We are already in a difficult economic situation,” Gan said. “The decline will only get worse.”

In places like Jurong, homeowners are paying the price. Some property developers have slashed prices on new apartments to gin up business or cut corners to save money. That undercuts the property values of earlier buyers, who increasingly are taking to the streets to protest.

In October, dozens of apartment buyers in Jurong gathered outside the sales office of Center Park, a 22-building residential complex pitched by Country Garden, the developer, as China’s version of Central Park in Manhattan. Security guards barricaded the entrance to prevent protesters from storming the building to demand their money back.

“I am very angry,” said Jia Rui, 24, who bought a Center Park apartment a year ago. He watched last year as property prices rose for months before deciding to buy the apartment, which will be bigger than the one he currently lives in with his wife and parents.

When he learned that similar apartments were later being sold at nearly half the price, Jia said, he felt helpless.

“It is not possible to get a refund,” Jia said. Then again, he added, Jurong will have a subway line connecting it to Nanjing, a major city, by 2023. “Maybe the price will go back up by then,” he said.

The current slowdown stems in large part from a three-year building spree driven by a surge in prices in many cities. Officials struggled to contain a white-hot property market with measures that included open consideration of a national property tax.

“You never know when the music will stop in China, so you try to do as much as possible before the music stops,” said Nicole Wong, a property analyst at CLSA, a stock brokerage. “Which it did.”

Housing is key to China’s well-being. It accounts for roughly one-fifth to one-third of China’s economic growth, depending on whether ancillary industries like construction and furniture-making are included.

Property is the largest source of wealth for households, a given in a country with strict rules against moving money overseas and a volatile stock market. In major cities, it sometimes accounts for as much as 85 percent of a family’s assets, according to researchers at Southwestern University.

That store of wealth is looking increasingly shaky. Sales in terms of gross floor area on the market have dropped sharply since September. The share of apartments in new developments that are being sold has plunged since the summer. The number of failed land auctions has doubled this year, indicating that property developers are unwilling or unable to buy land for new developments.

Now people are angry, and Chinese officials and property developers are doing something about it.

Officials tried various measures to take steam out of the market last year and are now reversing some of them.

In recent months, they have loosened mortgage requirements, eased restrictions on when homeowners can resell their properties and made it easier for university students to continue living in the cities where they are studying after they graduate, potentially increasing housing demand.

In some cities, property developers have cut deals with homebuyers to give them back the difference between the current price and the one they originally paid.

As housing prices begin to fall — in some cities by as much as they did during the depths of the global financial crisis in 2009 — some buyers have made their displeasure known.

Jurong, a small city by Chinese standards of 600,000 people about a 45-minute drive from Nanjing, has experienced at least six protests alone in recent months.

Jurong represents a bet by homebuyers that a buoyant market in Nanjing, a former Chinese capital and one of its more picturesque cities, will spread to surrounding areas. Many homebuyers are retired workers or farmers who have moved to the city from the surrounding countryside.

Today the city appears to be preparing for a future in which its population more than doubles. There are 19 other projects like Center Park.

Country Garden, the developer behind Center Park and other residential complexes around the country, has endured slumping sales and has slashed prices.

It has faced fury from buyers, some of whom have taken to smashing in the windows of sales offices in at least one city, according to the local media, which posted images and video. In a written statement, Country Garden said fluctuating home prices were “a normal market phenomenon” and said it would “make proper arrangements” to assuage angry homebuyers.

Hu Peiliang, the real estate agent in Jurong, and his friend Wang Liwei were selling homes in Nanjing before they decided to make the move to Jurong.

If prices were so high in Nanjing, it seemed only logical to both men that prospective buyers who were unable to afford a place there — or who were locked out of the market because of residential restrictions — would look to Jurong. The government’s plan to build a metro system made the city even more appealing.

At first they were right. In 2016, some 49,000 apartments were sold in Jurong, a remarkable number for a city where the annual average is closer to 4,000, according to Huifeng Li, a research director at the Purple Mountain Digital New Media Research Institute in Nanjing. The majority of the new buyers these days are speculators, he said.

Hundreds of buildings sprang up, offering a glimpse of a future bustling city. Now, these partly constructed buildings have more of a ghost town feel.

At the Center Park development site, green netting drapes over a dozen half-built apartment buildings, construction cranes on top of each. Men with white gloves stand at the sales office, from which soft jazz music is playing, waiting to greet prospective buyers. But there are few customers, and the greeters mostly look bored.

At the back of the office, a dozen real estate agents sit around coffee tables and stare at their phones.

After a tour of the show apartments, Wang said quietly, “I wouldn’t buy an apartment from them.” 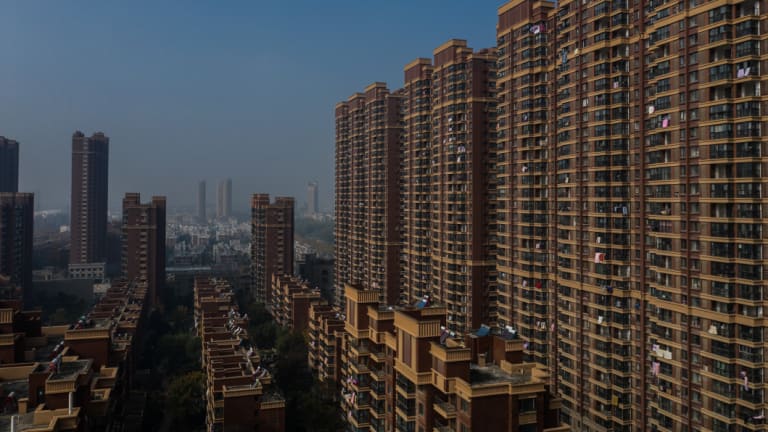