“We debated this in the parliament just a couple of months ago and the Government had the opportunity to put in place robust regulation around the building industry, but they choose not to do that.”

WHY?  Is it because this government has enjoyed a cosy relationship with the Developer Lobby?

WHY do you suppose the NSW Government is focusing on the Building Certifier, and not the Developers who are at the Apex … who happen to be “big Liberal Party Donors”?

The Building Certifier and the Developer have enjoyed a cosy relationship …

HOW did this “cosy relationship” come about?

WHY is it that Certifiers can tick off a particular trade if that contractor supplies a “certificate of compliance”?

COULD “private certification” also be a ruse for the blame to be laid at the feet of the Private Certifier?  Cough … cough …

WHAT about more information being available to home owners and buyers about a Developer’s disciplinary record and work history?

The NSW Government has announced a crackdown on dodgy building certifiers as it tries to manage the fallout from Sydney’s Opal Tower fiasco.

A crack was found in a pre-cast concrete panel inside the building on Christmas Eve, which prompted an emergency evacuation over fears the 34-storey building could have been structurally unsafe.

Some residents were allowed back into their homes, but were again ordered to get out on Thursday afternoon so a “comprehensive investigation” into the incident could take place.

The State Government has also launched its own investigation into the crack, appointing two university professors of engineering to write a report which will be made public.

But the Berejiklian Government has been under pressure to act further to allay fears about other buildings which have shot up in Sydney in recent years and Minister for Better Regulation, Matt Kean, today revealed its next steps.

“If you’re a certifier who’s done the wrong thing, I will find you and I will throw the book at you,” he told the ABC.

“I will rub you out of the industry if you’re found to be doing the wrong thing.”

The Government’s four new measures include a large compliance operation which will see 25 to 30 per cent of certification work audited every year, undertaken in a “strike force-style approach”.

Under a new disciplinary policy, any certifiers found to be corrupt or to have negligently signed off on a building which is unsafe or structurally unsound will be immediately kicked out of the industry.

Certifiers who are found to have breached the industry’s code of conduct on building quality will be banned from working on new strata developments for 12 months.

More information will also be available to home owners and buyers about a certifier’s disciplinary record and work history.

Mr Kean said the crackdown has not been launched because he is concerned about the way the Opal Tower was certified.

“There’s an investigation going on, I want to wait until we get the results of that investigation, but what it has highlighted is further community concerns about certification in NSW,” he said.

Mr Kean also hinted more changes to the building industry may be on the way.

“Certification is one piece of the puzzle here, but there are many other parts of the building industry where we need to shine a light on what’s been going on,” he said.

“I want to make sure we do whatever is possible to give the public confidence that the buildings that they are living in across Sydney are safe.”

The Minister for Planning and Housing, Anthony Roberts, is expected to give a preliminary update on the Government’s investigation today.

“What the Minister has done today is react to a disaster that has presented to this Government,” she said.

“We debated this in the parliament just a couple of months ago and the Government had the opportunity to put in place robust regulation around the building industry, but they choose not to do that.”

Independent Sydney MP Alex Greenwich has called for a special commission of inquiry into apartment building defects to be set up.

The investigation into the incident is expected to take at least another five days and residents are currently being put up in hotels around Sydney — and compensated — while they are required to be out of the building. 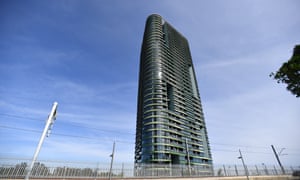