THE CHINA WAVE …. hit AUSTRALIA … and we continue to reel from its consequences … with the impact of its 1.4 BILLION People

Ketan Patel, an ethnic Indian now a strategist and investor having advised China’s Xi Jinping and India’s Narendra Modi on economic strategy with India on a trajectory over the next 10 years of driving a mighty URBANISATION – like that of China!

Patel has been visiting Australia for two decades encourages Australia to be bold.

BUT JAPAN was clever in building a vast high-speed rail network across India – a venture which has had no negative consequences of high immigration and Visa Manipulation for Japan like that proposed, it would seem, by Patel for Australia …

He proposes “Education” for another 200,000 Indian students in addition to the 600,000 foreign students at Australian universities.

Suggesting it rise to a million and in five years 50 million!

It does not end there due to our inept Government with the sell-off of our Real Estate with Permanent Residency thrown in!

Not only are Chinese students seeking the prestige of an Australian degree but are lured by the opportunity to buy our Real Estate to gain permanent residency and a Family Visa!

This dates back to when John Howard was PM in the late 90s when China’s middle class was embraced by changes to our immigration policy to offer “flexible citizenship” in return for investing in property and education!

WITH dire consequences for the incumbents of the lowest wages growth, insecure work, a Whole Cohort of Australians locked out of home ownership, or suffering from rental stress.  Where we live is being rezoned and annihilated to accommodate the huge influx, our roads are congested, buses, trains, hospitals and schools are all full-up as we lose our communities … our governments are working against our interests!

AUSTRALIANS HAVE SEEN THIS PATTERN BEFORE …

To see the transformation of modern India, you should start with a look at an unconventional place – a slum.

*A slum may be a pit of poverty and disadvantage, but an Indian one isn’t a life sentence; it’s a way station, “a parking lot for human beings”, as Patel puts it. And the movement of traffic through the parking lot is speeding up as India starts to deliver on its potential and opportunity widens.

Patel invites us to take a closer look beneath the bits of corrugated iron that maybe five or eight people call home:

“The most educated person in the family is probably your 12-year-old daughter. Your boys are also going to school [thanks to a national drive to improve school access] but the girls are probably picking it up faster”, a syndrome not unknown in Australia, either.

“When you get just enough money to get a tiny abode on the edge of the city, you buy it. Now you are transformed from rural peasantry and you have a small abode in the city.”

*”It’s an informal process to transform people’s lives and that’s what’s driving the curve of India’s GDP upwards,” says Patel, an ethnic Indian who knows something about grasping opportunity. He grew up in an immigrant family in a poor part of London and is now a strategist and investor who has the rare distinction of having advised China’s Xi Jinping as well as India’s Narendra Modi on economic strategy.

Over the next 10 years, the pursuit of opportunity will drive a mighty urbanisation. The proportion of Indians living in the cities “was 40 per cent, it’s heading to 50 per cent and in the next decade you will see 60 per cent”, predicts Patel.

*Australians have seen this pattern before. The urbanisation of China together with widening economic opportunity drove its transformation. Now India is following. As a result, Patel tells me, “it’s almost as if every industry is transforming. At first glance you won’t see it because you’ll see all these people and chaos but if you look under the hood, you will see how fast it’s changing”.

Australia’s Ashok Jacob, long-time financial confidant to the Packer family and now chairman of funds manager Ellerston Capital, says that India has annual economic growth rates of 6 to 7 per cent “locked in and if the chaos in India fades a little it will be 7 to 8 per cent”.

“It’s a long-term growth story,” says Jacob, also chair of the federal government’s Australia-India Council. “We are trying to tell Australian business, ‘you guys need to lean in to India. Every industry in India will increase its sales by 10 per cent a year over the next decade.

“If just 1 per cent of your business is in India, in a couple of years it will be 2 per cent and in a few more years it will be 10 per cent,” he tells me. “If we’re thinking about going to China, it’s too late, we’ve missed China. India is the opportunity.”

India’s transformation began with an early liberalisation program beginning in 1991, but it faltered badly. The advent of Prime Minister Modi, who is due for re-election next year, has put new energy into the process. Among other measures, he has brought 300 million people into the formal financial system by enabling them to have bank accounts, and he has tried to purge corrupt gains with a radical demonetisation scheme. He introduced a GST and new bankruptcy law, and wants to see more women participating in the economy.

“The key,” says Jacob, “is that India becomes one of Australia’s top three trading partners” as recommended by the report to the federal government by Peter Varghese, former head of the Department of Foreign Affairs and Trade and now chancellor of Queensland University.

Prime Minister Scott Morrison last week announced that the government would adopt all 20 of the Varghese report’s top recommendations for Australia to exploit India’s rise.

Patel, who’s been visiting Australia for two decades now, says he detects new seriousness from both sides about the India-Australia relationship. He encourages Australia to be bold.

Japan grasped the opportunity to build a vast high-speed rail network across India.

*”What’s the equivalent for Australia?” poses Patel, who was in Sydney raising investment for a $US700 million India fund for his firm, London-based Greater Pacific Capital. “If it’s education, you will figure out how to get maybe 200,000 Indian students” at campuses in Australia and India, in addition to the worldwide total of 600,000 foreign students at Australian universities today.

“That will rise to a million and then in five years it will be 50 million” with the right plan and the right commitment, says Patel. “It has to be in the 10s of millions to make a difference.”

The chief obstacle to a serious Australian effort, according to Jacob, is nothing physical or legal but something harder to change – the Australian business mindset: “With a few exceptions, Australian business has failed to go global. If you look, you have four banks, two grocery companies, a couple of telecoms – they are just squeezing the lemon” of comfortable oligopoly in the Australian market. “They are just squeezing the consumer. The banking royal commission is a symptom.”

The federal government plan is a good one, Australian and Indian strategists concur. Now Australian business needs to be bold. Otherwise, we’ll just be slumming it.

Peter Hartcher is the political editor and international editor of The Sydney Morning Herald. He is a Gold Walkley award winner, a former foreign correspondent in Tokyo and Washington, and a visiting fellow at the Lowy Institute for International Policy. 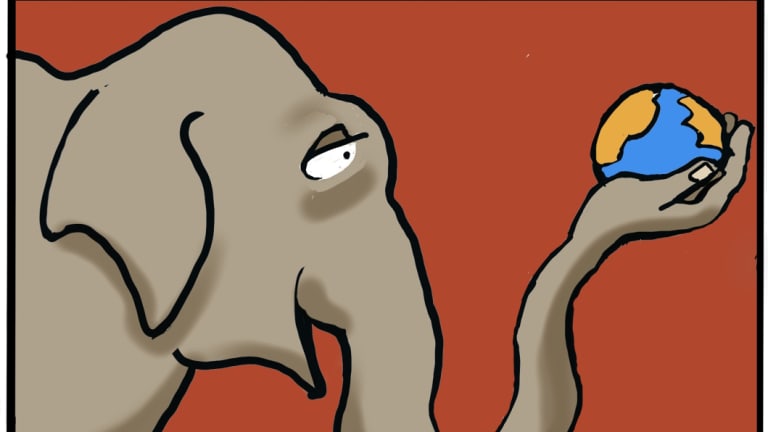