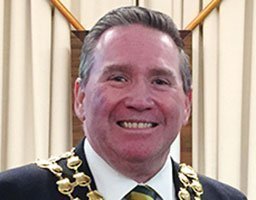 Pickering anticipating his ousting by the Liberal Party created a new lobbying entity, disguised as an industry body “The Housing Supply Association” was given legitimacy by his long-time buddy, NSW Planning Minister, Anthony Roberts at its launch.

“What I’ve been able to do with some very like-minded people….. and I thank Holdmark for their participation previously, (is) to extend this noble and proven achievement that we have in Ryde to the state of NSW.”

Michael Cooke and Greg Coli, both former lobbyists for Pickering’s Hugo Halliday PR and Marketing Pty Ltd, were listed as lobbyists for Holdmark through their companies while Pickering was still serving as a councillor and mayor at Ryde.

Cromarty Communications Pty Ltd, Coli Holdings Pty Ltd and Hugo Halliday and their employees were all removed from Commonwealth and state lobbying registers in mid-2014.

Pickering has never disclosed an interest during voting on matters relating to Holdmark and recently used a “mayoral minute” in an attempt to expedite a VPA with the developer.

Pickering, anticipating his ousting by his up-until-recently beloved Liberal Party, created a new arm’s length lobbying entity, disguised as an industry body, The Housing Supply Association, to be run from Hugo Halliday’s office in Parramatta, was given legitimacy by Pickering’s long-time buddy, NSW Planning Minister Anthony Roberts at its launch last month.

Pickering told 400-odd guests at the launch, lured by the offer of a free lunch at Doltone House in Pyrmont, that he “could influence the situation in Ryde but I wanted to go further”.

“What I’ve been able to do with some very like-minded people….. and I thank Holdmark for their participation previously, (is) to extend this noble and proven achievement that we have in Ryde to the state of NSW,” he said.

The VPA with Holdmark supposedly involves $145m worth of developer contributions including “affordable housing” at its site in Talavera Road, Macquarie Park, to build more than 1,400 units in a development of up to 52 storeys.

But details of the VPA, described by one councillor as “undercooked” have not been publicly released and council’s legal advisors have raised red flags over valuations of developer contributions, the absence of binding guarantees and scheduling of public benefit delivery.

“We negotiated an uplift in our floor space ratio which allowed us to build more space to offset the cost of providing the affordable housing,” Gavin Carrier of Holdmark told Seven News Sydney on the day of the launch.

Curiously, the Holdmark name did not appear on Seven’s report, which only showed the name “Gavin Carrier” and the title “Developer”.

Both Pickering and sidekick Jane Stott were dumped by the Liberals in a preselection contest shortly before last weekend’s elections.

Their resignation from the NSW Liberal Party came before its NSW executive could consider a possible ban after it emerged Pickering had accused NSW Premier Gladys Berejiklian of fraud at a public rally.

Pickering and Stott contested this month’s council election as part of an unnamed group of four independents in Central Ward, Pickering standing aside for Stott to assume number one spot.

Stott, despite her unpopular group garnering less than 12 per cent of the vote in Central Ward, was amazingly still in the running for a council seat at the time TWT was going to press, thanks to a preference deal with the Christian Democratic Party.

An anomaly in the electoral laws allowed Pickering to tick a box in his candidate application that indicated: “I am not a close associate of a corporation that is a property developer”. Under the relevant legislation, “close associate” refers to having a financial stake in a developer.