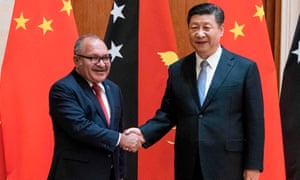 From 2012 to 2021, the AUSTRALIAN aid budget fell by 32% while all other government spending increased by 31%. Australia’s aid budget, as a proportion of national income, is the lowest it has ever been.

And Pryke, director of the Lowy Institute’s Pacific Islands program, said Australia’s aid program was not well understood by the public. A Lowy Institute poll this year found Australians believed the government spent about 14% of the federal budget on aid funding, and should reduce that figure to 10%. Australia actually spends 0.8% of its budget on aid.

“We think of ourselves as a generous country, and that our aid program will reflect that,” Pryke said.

China’s aid spending in Papua New Guinea – with its focus on infrastructure and “few-strings-attached” concessional loans – risks eroding Australia’s influence in the country, with Australian aid sometimes viewed as paternalistic and unwieldy.

A Deakin University submission to a parliamentary inquiry, based on interviews with Papua New Guinean business, political, academic and community leaders argues Australia risks being diminished by rising Chinese spending.

PNG is Australia’s closest neighbour, and for reasons of proximity and a shared history – PNG was under Australian administration until 1975 – Australia has been its most significant international partner.

But China has recently dramatically increased its aid spending in PNG, with a particular focus on signature pieces of infrastructure and concessional loans.

According to the Deakin University submission, “those interviewed noted the differences of the structure, transparency and detail of Australian aid planning to that of the more opaque Chinese aid. For one interviewee, this made ‘Chinese aid more effective. Chinese aid is unconditional, no strings attached … the government can use this aid more flexibly’.”

There was a view from some respondents that Australian aid – highly accountable, and focused on the human sectors, such as education, health and gender – was sometimes seen as paternalistic.

“It was also noted that ‘Australia’s influence has diminished considerably as a result of the rise in Chinese aid flows to PNG,” the submission says.

One of the authors of the submission, Prof Matthew Clarke, told the Guardian China’s aid to PNG was recognised there as a vehicle for increasing Beijing’s influence in the country, its trading sphere and leverage in the region.

“When it talks to PNG, China talks about a ‘south-to-south’ relationship,” Clarke said. “It sees itself as being a developing economy, as much more of an equal partner, which is well-received in PNG.

“And the type of aid China is offering also lends itself to the Melanesian context, the ‘big man’ political culture, where leaders can point to a piece of infrastructure and say, ‘look what I’ve delivered, look what I’ve brought’.”

Clarke said the PNG government was pragmatic about aid, and willing to play one donor off against another in order to achieve a desired outcome.

“There are probably two broad lessons: that this is not an issue that just involves Australians and China – that the voices and views of Papua New Guineans must be considered. If we fail to listen, we won’t have a good outcome,” he said.

“And that Australia needs to be smarter with its aid. For Papua New Guinean leaders, it is easier to critique the Australian aid program because another is there to compete and take its place.”

The parliament’s joint standing committee on foreign affairs, defence and trade is undertaking an inquiry into the effectiveness of Australia’s aid in the Indo-Pacific region and “its role in supporting our regional interests”.

Australia is the largest aid donor in the Pacific, with 90% of its $3.9bn aid budget directed towards partners in the Indo-Pacific.

But China’s growing interest has been followed by reports of plans to build military bases in countries such as Vanuatu, and its assertiveness in militarising atolls in the South China Sea is seen as a template for increased military influence.

Australia remains the dominant aid partner. The Lowy Institute estimates that between 2006 and 2016, Australia has dedicated $7.7bn in aid to the region, dwarfing China’s $1.7b. However, there are concerns over China’s rising interest.

There is a real risk in trying to outcompete China. The reality is they have deeper pockets
Jonathan Pryke

The foreign minister, Julie Bishop, said small states in the region could be harmed by unsustainable debt through aid “loans”, with debt-for-equity swaps imperilling their sovereignty.

“We’re concerned that the consequences of entering into some of these financing arrangements will be detrimental to their long-term sovereignty,” she said.

Australia also remains the largest donor to PNG, but Australia’s aid to PNG performs badly in terms of its efficacy and accountability.

“That,” argues Jonathan Pryke, director of the Lowy Institute’s Pacific Islands program, “is a reflection of how difficult an environment to operate in PNG is, and how important engagement is.”

Pryke said it was risk for Australia to view China’s rising presence in PNG solely as a threat.

“We should not look to be rivalling with China,” he said. “Looking at our aid program through the lens of a cold war mentality – that could actually result in aid being less effective. There is a real risk in trying to outcompete China. The reality is they have deeper pockets.”

But there are growing concerns over how aid is delivered. China’s approach to aid – by engaging directly with the political elites – is already undermining the weak institutions that countries like Australia seek to work through, Pryke said.

“The way countries like China go straight to the ministerial level – they come in with few strings attached and do whatever the minister wants – that really undermines the strategic planning of government agencies,” he said.

Pryke said Australia needed to bring a collaborative approach to aid in PNG and across the Pacific.

“I think the line Julie Bishop had was about right: recognising that other countries will be in the region, but that Australia wants to be the ‘partner of choice’,” he said.

Pryke said the parliament’s review of aid was welcome. After years of disruption, the subsuming of AusAID into the Department of Foreign Affairs and Trade, the loss of development professionals inside the public service, and massive budget cuts, a re-evaluation of Australia’s aid priorities and direction was needed, he said.

From 2012 to 2021, the aid budget fell by 32% while all other government spending increased by 31%. Australia’s aid budget, as a proportion of national income, is the lowest it has ever been.

And Pryke said Australia’s aid program was not well understood by the public. A Lowy Institute poll this year found Australians believed the government spent about 14% of the federal budget on aid funding, and should reduce that figure to 10%. Australia actually spends 0.8% of its budget on aid.

“We think of ourselves as a generous country, and that our aid program will reflect that,” Pryke said. “But we don’t concern ourselves with the details; we trust the government to do what’s right. But the government is not doing what is right.”