What else is China buying in Australia?

The composition of Chinese investment in Australia is changing. Fast.

It is no secret real estate has a great attraction to investors. But contrary to high profile discussion in some quarters of the public and mainstream media, in recent times a significant portion of this investment is being funnelled towards commercial real estate rather than residential property.

“Markets need to brace for a world where China invests $A400 billion a year offshore.”
Jerry Ge, Contributing editor at BlueNotes

That’s only part of a much broader diversification. According to a joint report published by KPMG and the University of Sydney, the once clearly favoured mining and energy sector which accounted for 70 per cent of Chinese foreign direct investment (FDI) in Australia in 2010 accounted for less than 18 per cent in 2014.

Chinese investment in commercial real estate quadrupled to $A4.37 billion in 2014, almost half Chinese FDI in Australia. Aside from commercial property, there is growing interest by Chinese capital in opportunities in Australian agribusiness, infrastructure, leisure and retail, a trend likely to continue into the future.

With China increasingly diversifying its own economy over the past decade towards higher end manufacturing and increasingly sophisticated services, its global investments appear destined to diversify in tandem.

Several factors are behind this renaissance of Chinese interest in industries outside of resources. The slowing domestic economy is pushing Chinese businesses offshore to diversify their risk profile. 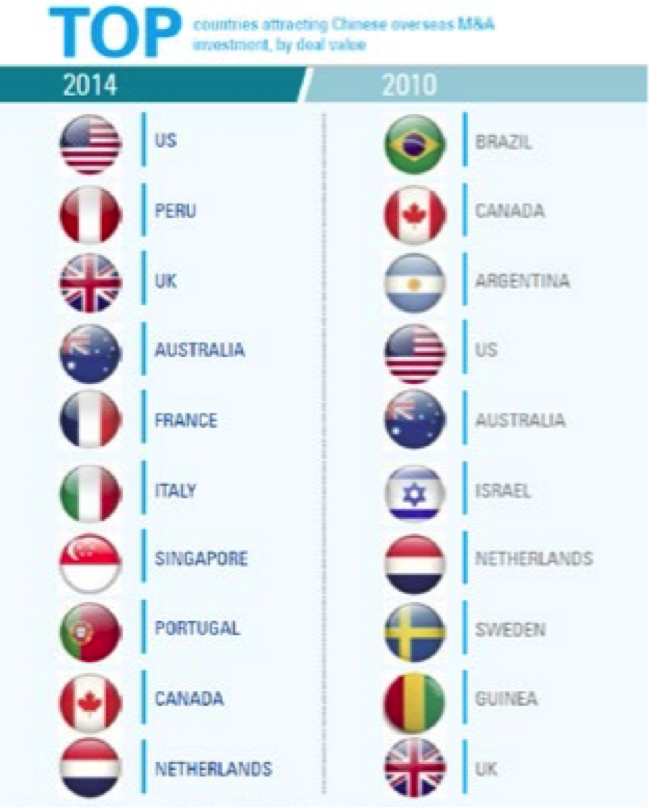 Australia is the perfect destination because of its geographic proximity, transparent regulatory environment and low funding cost. In a recent report released by National Australia Bank and University of Technology Sydney it was found Chinese business leaders regarded Australia as the most favourable place to do business while its economic importance was second only to the US, beating Britain, Russia and Canada.

The China Australia Free Trade Agreement (ChAFTA) also encourages more investment from China into Australia. Inbound private Chinese investment proposals below $A1.08 billion will no longer require Foreign Investment Review Board (FIRB) approval, except in so-called sensitive sectors like agriculture where the new thresholds are $A15 million for land and $A53 million for agribusiness. 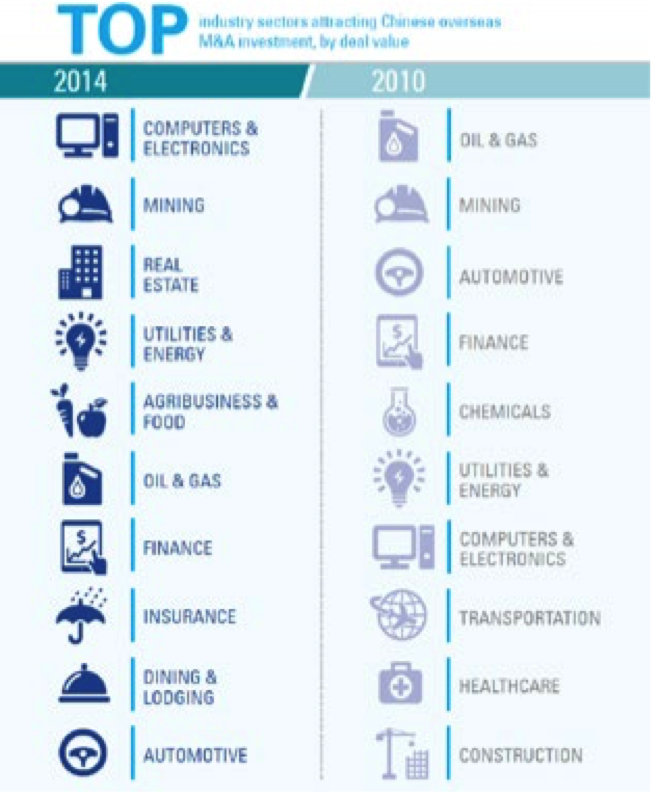 To Chinese investors this is particularly attractive as food safety is a perennial concern for consumers amidst scandals related to health concerns in recent years. The growing middle class is willing and able to pay a premium for peace of mind.

Jeff Turner, trade commissioner of Austrade in Chengdu told The Australian Financial Review there are as many as 300 Chinese cattle and cattle-related companies looking to invest Australia.

“We see Australia as the food hub for the Asia-Pacific region. If you look at the region, from south-east Asia to Korea, Australia and New Zealand are the only two that have export capacity,” he said.

“We are hugely impressed with Australian farmers. The work ethic. The commitment… Australia has not put in a lot subsidies compared to other parts of the world, which is what makes them so competitive cost-wise.”

The Beijing Australia Agricultural Resource Cooperative Development Fund was founded in September 2014. It is a joint partnership between state-owned Beijing Agricultural Investment Fund and the Shenzen-based Yuhu group. The $A3 billion fund is specifically set up for investment of Australian Dairy products.

For the dairy industry back in China, the market likes the product from Australia and it seems it cannot be easily substituted by other countries’ products. The recent abolishment of the one-child policy is also a huge boost for Chinese investors looking for quality Australian foodstuffs that can meet anticipated higher future demand if a baby boom eventuates.

Whilst the granting of 99-year Port Darwin lease worth $A506 million to privately owned Chinese company Landbridge has created international controversy, many other large and experienced Chinese companies have also shown genuine interest in investing in Australian infrastructure.

State-owned funds and enterprises are more interested in engineering and infrastructure deals for strategic purposes of replicating and utilising the technology and knowledge of those projects back in China.

Three major infrastructure deals accounted for 20 per cent of the total 2014 investment value. This include the acquisition of John Holland by CCCI for an enterprise value of approximately $A1.5 billion, followed by a $A1.75 billion deal to secure a 98-year lease on the Newcastle Port by China Merchants Group and Hastings Funds Management.

The experience with Newcastle suggests Darwin may have been an exception to the rule of smooth and uncontroversial approval for Chinese consortia in Australian infrastructure.

However, recalling the blocking of Huawei Australia’s participation in the NBN and the bitter fallout is equally indicative political sensitivities will continue to hamper investment in certain cases.

For the first time, there has been a material investment in the leisure and tourism sectors from China led by the $A1 billion acquisition of Hoyts Group by ID Leisure International Capital in 2014.

Due to popularity of golf amongst the elite class in China, Chinese groups have spent over $A400 million in the past two years for some of Australia’s most ­notable courses.

Hong Kong based GH Properties has spent more than $A50 million in the past two years buying the Links Hope Island and Noosa Springs golf courses in Queensland. Members of GH’s Dragon Lake course in Guangzhou have reciprocal membership to GH’s Queensland properties.

A key Chinese advertising and media company, White Horse Group, recently bought Queensland’s Lindeman Island for $A12 million, committing to convert it into a golfing retreat and resort.

In 2014, 12 per cent of Chinese direct investment was recorded in the leisure and retail sector of Australia. This shift of focus is well fitted into the domestic reorientation towards social consumption and consumer oriented services according to the KPMG and University of Sydney report.

Chinese investment in Australian property will remain strong regardless of any heightened FIRB requirements. The appetite to investment in new and existing Australian infrastructure is also evident as more Chinese companies are interested in the anticipated increase in government asset sales in Australia over the next few years.

The relaxation of labour mobility under the ChAFTA (Chinese infrastructure projects above $A150 million will be able to use Chinese labour if the skill are not available locally) will only be the icing on the cake.

Reserve Bank of Australia governor Glenn Stevens said in July markets need to brace for a world where China invests $A400 billion a year offshore. The vast opportunity available for Australia has only just emerged.

Jerry Ge is a contributing editor at BlueNotes

The views and opinions expressed in this communication are those of the author and may not necessarily state or reflect those of ANZ.