AEC returns: Adding up who owns our democracy

IF YOU WANT to see the true face of Australian democracy, you need look no further than the Australian Electoral Commission’s political party annual returns for the financial year 2013-2014. 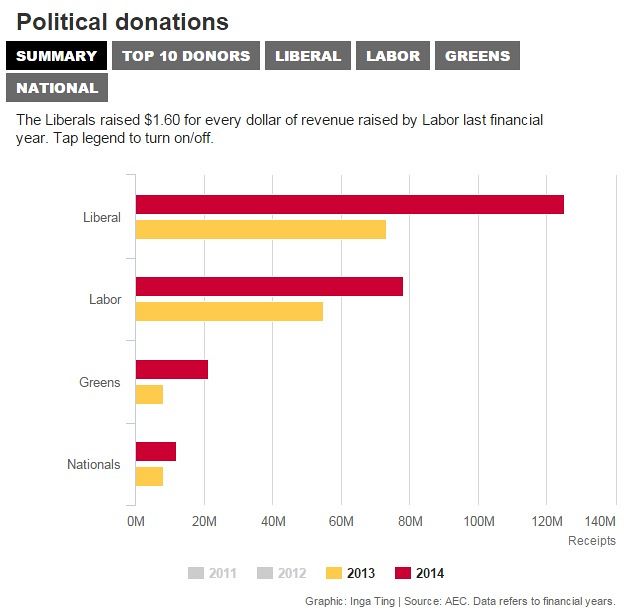 Some of the numbers are very big, others are only terrifying. Let’s have a look at the top few on both sides.

The main revenue source, $20m, was from the AEC for its per vote $ refund.

Its biggest private donor was a chap called Zi Chun Wang who tipped in $850,000.

According to the Guardian:

‘A mystery donor who personally made the largest contribution to the Australian Labor partyin the lead up to the 2013 election is linked to a Chinese-Australian property group with major development projects in Victoria.’

Next, at $600,000 was an outfit called Australia Kingold Investment Development Co P/L which has a website saying:

Presumably for insurance purposes, Kingold gave $100,000 to the Libs as well.

Then there are the branches of course, all with their separate disclosures.

The Liberal Party nationally out-grossed Labor at $43 million. But, in classic Liberal fashion, it spent $46 million and racked up a net debt of $4.1 million.

Nimrod Resources, an unlisted miner owned by Paul Marks – whose fabulous birthday soiree Tony Abbott controversially flew to recently – topped the others list with $500,000 — followed by a long list of corporates with $100,000 plus.

Like the ALP, the L-NP has branches. But these are on another level.

But with backers like Westpac, which tipped in $2m, who cares?

The Victorian Division did not fare as well. Its income of $18.2m fell $2m short of expenses. Thank goodness for the Cormack team, who dug up a separate $2.76m for the Victorian cause. The Federal Secretariat had to tip in $2.6m as well.

By comparison, the South Australian Division presents as a model of fiscal rectitude. Receipts totalled $10.2m against expenses of only $8.5m. As a result, the Division carried debt of a modest $116,000. That’s $9.8m in Liberal Party debt so far but losses pulled back to $4.2m.

When I looked, the AEC site would only provide information for these states (maybe it’s working now), but the pattern is clear.

Offshore connections, big banks, shadowy foundations and a conga-line of minor, yet substantial, donors, all with their hands out.

This is what our democracy has come to.

Which Political Party failed to disclose more than $4m in receipts, payments and debts?http://gu.com/p/46z72/stw  #Australia #auspol

Exclusive: electoral commission documents obtained under freedom of information laws show a pattern of errors by political parties in managing their financial records