HOW PUBLIC CONCERNS ABOUT HIGH IMMIGRATION ARE SUPPRESSED

-74 per cent of voters thought Australia did not need more people
-54 per cent wanted a reduction in immigration.

But adverse public opinion has had little impact on policy.

There are two reasons for this:

-political pressures on policy makers applied by the growth lobby, Treasury and the Reserve Bank

-and social pressures generated by cultural progressives (most of them university graduates). It is they who promote, and monitor, the doctrine that opposition to high migration is racist.

WHAT the “cultural progressives” have not recognised is that the high population growth is a STING conceived by the real estate/developer sector to exert political pressure for policies to capture the possible market of 1.4 Billion people in China to buy the real estate …

To the detriment of a whole Cohort of Australians locked out of the housing market while where we live is being destroyed!

HOW UNAUSTRALIAN IS THAT!!

View for how the Sting was contrived:

HOW PUBLIC CONCERNS ABOUT HIGH IMMIGRATION ARE SUPPRESSED

Dr Katharine Betts from The Australian Population Research Institute (TAPRI) has published a new report entitled “Immigration and public opinion in Australia: how public concerns about high migration are suppressed”, which explains why policies supporting mass immigration and a ‘Big Australia’ persist against the wishes of Australian voters.

Below is the Executive Summary, along with the key graphics from this report: Australia’s remarkable population growth over the last decade is mainly being driven by high levels of immigration.

Data from the 2016 Australian Election Study (AES) collected after the July 2016 federal election show that 72 per cent of people working in arts and media actually wanted a further increase in immigration, as did 49 per cent of teachers and academics.
In contrast, those business managers who are not graduates were the keenest on a reduction. The AES data also reveals an even more striking finding. Sixty per cent of the candidates standing for election in 2016 wanted an increase in migration and only four per cent wanted a decrease. 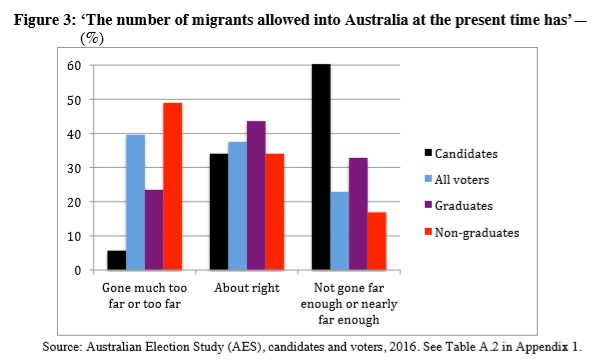 This position was especially marked for Labor and Greens candidates. On the immigration question politicians live in an attitudinal world remote from the average voter.

Over a year later in 2017 Tapri found that 74 per cent of voters thought Australia did not need more people and that 54 per cent wanted a reduction in immigration.

But adverse public opinion has had little impact on policy.
There are two reasons for this:

The Tapri survey documents this, finding that nearly two thirds of voters think that people who question high migration are sometimes thought of as racists. Thirty-one per cent of this group say that this is because such sceptics usually are racists (an opinion endorsed by 41 per cent of graduates). Sixty-nine per cent of this sub-group say that the accusation is unfair ‘because very few of them are racists’, a proportion rising to 75 per cent among non-graduates.

Graduates predominate among the guardians. Twenty-six per cent of graduates took the strong moral position that questioning high migration was usually a manifestation of racism. Not surprisingly, graduates who are guardians against racism are much more likely to want an increase in migration than are the threatened or indeed the sample as a whole. A further question found that people who were threatened by possible accusations of racism were less likely to speak out about immigration, especially if they were graduates. As for the confused, 45 per cent said they didn’t know enough about immigration to discuss it.

Many voters are either silenced by the threat posed by the guardians or too confused to take an active part in public debate. If the two categories of threatened (45 per cent) and confused (10 per cent) are added, 55 per cent of voters may be deterred from entering into any debate on immigration.

The guardians are right to take a strong stand against racism but wrong to see it where none exists. The problem lies in the moral reflex that equates discontent about high migration with racism. The silence this promotes does more than inhibit democratic reform, it gives comfort to the growth lobby. This profits from immigration while leaving the silenced majority to pay the costs.

This disconnect between public opinion and policy highlights why Australia desperately needs to have a plebiscite on Australia’s future population.

We need to take decision making out of the elitist’s and politicians’ hands and give the Australian people the opportunity to choose Australia’s future population size (and by extension immigration levels) via a democratic vote.

Australia just had a plebiscite on same sex marriage, so why can’t we also have one on this issue? It is just as contentious but, unlike same sex marriage, also has direct impacts on current and future Australians’ living standards.

The full TAPRI report (May 2018) can be downloaded here.